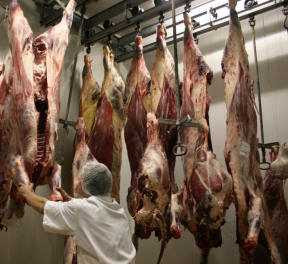 Britain's last small, rural abattoirs claim they are under threat from a controversial plan to modernise the industry, which could cause the price of meat to rise. Hundreds of jobs could be lost through the plan to modernise meat inspections, ultimately hitting prices at butcher shops and supermarkets, they warn.

So writes Harry Wallop, Consumer Affairs Correspondent for The Daily Telegraph, who then helpfully tells us that, currently, every animal killed in a UK abattoir needs to be inspected by an official inspector from the Meat Hygiene Service, who is responsible for the carcass being stamped with its distinctive label. A vet also has to be permanently on site.

We also learn from the helpful Mr Wallop that the process is hugely costly for the British taxpayer, which has had to cough up £190 million of public money subsidising meat inspections over the last seven years. And so rigorous is this inspection that, according to the Food Standards Agency, even the nuclear industry does not have such a thorough testing regime.

The FSA wants the abattoir owners themselves to pay more of the costs – part of a move to cut costs at the Department for the Environment, Food and Rural Affairs, a department which has substantially over spent its budget in recent years. On Friday, the FSA published its proposals for abattoir owners to increase their costs by 12 percent.

What Mr Wallop does not tell us though is that the "controversial plan to modernise the industry" stems from Regulation (EC) No 854/2004 of the European Parliament and of the Council of 29 April 2004 laying down specific rules for the organisation of official controls on products of animal origin intended for human consumption – as amended.

And I'm sure it was a complete oversight that he failed also to tell us that this must be read with Regulation (EC) No 882/2004 of the European Parliament and of the Council on official controls performed to ensure the verification of compliance with feed and food law, animal health and animal welfare rules.

It is these little bundles of joy which have Norman Bagley, at the Association of Independent Meat Suppliers - which represents many of small red meat and poultry slaughterhouses - claiming the 12 percent increase is just the start of "an inexorable move towards abattoirs paying the full cost of meat inspections". These costs, he says, are likely to be passed on to the consumer, otherwise abattoirs would face closure.

Bagley points out that in 1975 there were 1,600 slaughter houses in the UK. Now there are just 300, with 176 of those being small, often family-run sites. "The authorities forget that old-fashioned, small abattoirs slaughter half the animals in the UK. They can't cope with cost increases. Many are just going to have to close their doors," he says.

The "authorities" in this case, are a combination of the British government and – more importantly – our master is Brussels, who foisted this insane system on us, the earlier version of the regulations having caused many of the closures to which Bagley refers.

So ingrained in the fabric of our meat industry is EU law that it is long since that our own (London) government had any say in the matter. Even the BBC seems to know this, but as long as we have "useful idiots" like Harry Wallop, the "elephant in the room" need never break cover.