Of course they have immunity 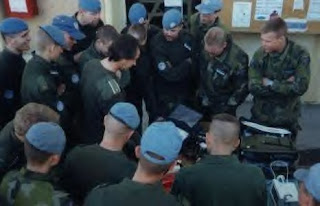 Some time ago I wrote on my alternative outlet, the BrugesGroupBlog, that, unusually, the UN was being sued because the negligence and, let’s face it, incompetence and lack of understanding of what was going on, had resulted in the deliberate murder of 8,000 men and boys. Given the UN’s track record in peacekeeping operations (DR Congo and the Balkans in general spring to mind but others are not far behind) this was going to be an important decision. And it is.

A Dutch court ruled Thursday that it has no jurisdiction in a civil suit against the United Nations by survivors of the 1995 Srebrenica massacre in Bosnia, affirming U.N. immunity from prosecution, even when genocide is involved.

A group called the Mothers of Srebrenica was seeking compensation for the failure of Dutch United Nations troops to prevent the slaughter by Serb forces of more than 8,000 Bosnian Muslim males in the U.N.-declared safe zone.

The Hague District Court said the U.N.'s immunity — which is written into its founding charter — means it cannot be held liable in any country's national court.

if a Dutch court decided it had jurisdiction in the case, "any court in any country could do so and that would thwart the viability of the United Nations."

Well, we wouldn’t want to thwart the UN’s viability, would we? And on that subject, we hear that the Security Council has rejected the idea of sanctions on Zimbabwe, a decision that, according to President Robert Mugabe, who has already been feted by the African Union, is a defeat for racism.

Two of the countries that blocked the American resolution were China and Russia, permanent members of the Security Council. Is anybody surprised by that? Well, David Miliband, our youthful looking Foreign Secretary seems to be. To him Russia’s veto is “incomprehensible”.

"I'm very disappointed that the U.N. Security Council should have failed to pass a strong and clear resolution on Zimbabwe," Miliband said in a statement.

"It'll appear incomprehensible to the people of Zimbabwe that Russia, which committed itself at the G8 to take further steps including introducing financial and other sanctions, should stand in the way of Security Council action."

"Nor will they understand the Chinese vote," Miliband said. Veto-holding China was also among five countries that opposed the U.S.-drafted text in the 15-nation council on Friday.

Of the other members, South Africa, Libya and Vietnam also voted against and Indonesia abstained. Russia maintained that Zimbabwe posed no international threat and, therefore, the situation was not within the Security Council’s remit. This may well be true but it merely underlines the need to stop pretending that the UN is some kind of a moral force for good in the world. (Not that this blog has ever been known to say that.)

While we are on the subject of not pretending any longer, it might be a good idea not to pretend that Russia is in any way an ally of the West. Predictably, the Russian Foreign Ministry hit back at British and American criticisms of the country’s stand over Zimbabwe:

The Russian Foreign Ministry in a statement Saturday said the criticism "places a question mark over the worthiness of Russia as a G-8 partner," The Associated Press reported.

It added that the possibility of U.N. sanctions on Zimbabwe was excluded at a recent G-8 summit in Japan.

Russia said it believed the sanctions would set a precedent for U.N. meddling, AP reported.

Does this mean that Russia is about to leave the G8 in a huff? Let us hope so. After all, questions about the suitability of her membership – hardly one of the leading industrical economies or a democracy – have been asked ever since the anomalous situation had been created.

The last sentence, on the other hand, makes it clear what Russia is really saying, regardles of what it did or did not agree to at the G8 meeting. Ever since the idea of a United Nations was mooted, the Soviet Union showed itself to be determined to ensure that internal oppression and human rights crimes should not come under its aegis. This is probably quite a good idea as the UN can do absolutely nothing about any of these problems. On the other hand, it does rather obviate the necessity for the UN and that Russia would not like. The Security Council has always been a useful forum.

If the UN starts agreeing to sanctions on countries and politicians who are guilty of serious crimes against humanity and, indeed, human beings, then might it not one day start discussing the behaviour of certain politicians in Chechnya? Probably not, as it happens, but the Russian government believes in being safe. Of course, its recent intervention and creeping invasion of Abkhazia and Southern Ossetia may well be described as a threat to international security and may be the other reason why Russia is so very unanxious to see the UN straying into that territory.

The question is whether the UN refusing to agree on sanctions against Zimbabwe makes the government now legitimate enough for the EU to resume (if it ever stopped) giving aid to the country. As Reuters reports:

The European Commission is ready to provide up to 250 million euros in development aid for Zimbabwe's worst-hit sectors if the country gets a legitimate, credible government, the EU's aid chief said.

The European Union's executive arm would then also call for an international lifting of debt owed by the country, EU Aid Commissioner Louis Michel said.

"I would encourage the rest of the international donor community to make it clear today that it is ready to provide substantial and immediate assistance to Zimbabwe in the wake of a transition towards democracy," Michel said.

The Commission is not the EU’s executive arm but both legislative and executive (and completely illegitimate in itself, let it be said in passing, though not precisely in the Mugabe league of nastiness) and its readiness to plunge money into a country that is a complete mess without bothering to find out what is really needed and to what extent the people of that country should be allowed to take charge of it is really touching.

By the way, Mugabe’s government has been illegitimate and viciously oppressive for quite a long time, during which he, together with his friends and relations, has managed to wreck what was an extremely successful economy. Does that mean the EU stopped giving the country’s rulers our money to ensure that they stayed in power and continued to oppress the people of Zimbabwe? Not on your life and not on the Zimbabweans' life either.

The European Commission is the most important aid donor to Zimbabwe and last year provided 91 million euros in humanitarian aid and other assistance.

Anyone would think the European Commission was handing over the Commissioners’ own money to possibly the bloodiest tyranny in Africa at the moment. Mrs Mugabe, for one, must have been very grateful for the help she received in her shopping trips.
Posted by Helen at 19:14