The erosion of liberties 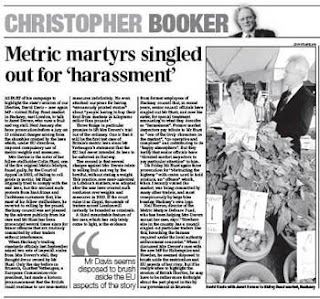 In his main tale today, Booker recounts how metric martyrs Colin Hunt has been singled out for "harassment" by Hackney Council officials, in a classic example of how low-grade these jobsworths have become.

This is part of the ongoing saga which started last September when Hackney's trading standards officials seized two sets of imperial scales from a stall in Ridley Road market they thought was owned by Mr Hunt, when in fact it was owned by his sister, Janet Devers.

There is, however, a sting in the tail of this account of the latest machinations of the Hackney officials, in that Booker recalls how, as part of his campaign to highlight the state's erosion of our liberties, David Davis - now again MP - visited the market to talk to Janet Devers.

When Booker discussed the case with the new MP for Haltemprice and Howden, he records that Davis "seemed disposed to brush aside the metrication and EU aspects of her story." As with many MPs, this is not an issue in which they take much interest, despite its iconic status as a marker of the gradual erasure of our national identity by Brussels eurocrats and their fellow-travellers on these shores.

Writes Booker, if Davis really wishes to highlight the erosion of British liberties – where is has become a criminal offence for one Englishman to sell another a pound of apples - he may have to be rather more forthright about the part played in this by our government in Brussels.

It is one thing getting worked up about alleged terrorists being locked away for questioning for 42 days, but the man has been remarkably silent about that greater overall threat to our liberties.
Posted by Richard at 20:40