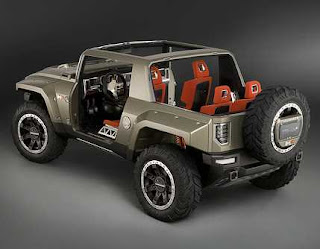 With the advent of the London Motor Show, more than a few journos are twittering about the new "green" Hummer, mentioned in passing by The Guardian and given pride of place by our favourite paper.

What allows this sudden conversion to "green" credentials is the use of biodiesel, which the manufacturers "insist" is far more environmentally-friendly than using conventional petrol – a claim which is accepted uncritically by far too many hacks.

Would that they have read our piece on the Great biofuel con where we report that the production of such fuels from conventional food crops can be as little as 69 percent fuel efficient. That means, of course, that for every unit of energy put into the production of the fuel, you get just over two-thirds back – meaning that the conversion of a vehicle to biodiesel ends up with it using even more energy.

To be fair, Car Magazine refers to the Hummer as the "All-American dinosaur" and Greenbiz notes sourly that, "there are more than a few companies that … are trying to put green lipstick on a pig by making environmental marketing claims that far outweigh the size of their efforts."

But the bigger problem is the "green illiteracy" brought about by the lazy shorthand of journalists. Recycling is always regarded as "green" even though, for many items, the energy inputs required for collection, sorting and processing exceed the energy recovered, making it more energy-efficient to go for landfill. Yet landfill is always styled as "environmentally damaging", or some such.

Similarly, the idea of electric cars is fast becoming the idée fixe for the chatterati, lauded yesterday by that economic illiterate Gordon Brown, who wants Britain to be the "electric car capital of Europe".

It takes very little intellectual effort to work out that conversion of fossil fuels (still the main source of electricity) to electric power involves a massive conversion loss, the distribution loses more and then even more losses are involved in battery charging and conversion back to usable power.

Various sources quote an overall efficiency of between 20-25 percent, with masses of other sources claiming internal combustion energy efficiency is as low as 15 percent. Such is the miasma of claim and counter-claim that it is very difficult to work out where exactly the truth lies, although there are some claims that high-efficiency internal combustion engines can deliver 30 percent or more. The science, as they say, is far from settled.

Of more immediate importance, however, is the prospect of real power shortages as the generation infrastructure crumbles, yet here we have Mr Brown advocating an increased burden on the system. This simply cannot be sensible.

All of this points, once again, to a fundamental incoherence in public policy, which is worrying enough in its own right. But when the media also displays its own brand of green illiteracy, peddling uncritically the received wisdom, we stand at risk of sinking into the morass without even being aware of what is happening.