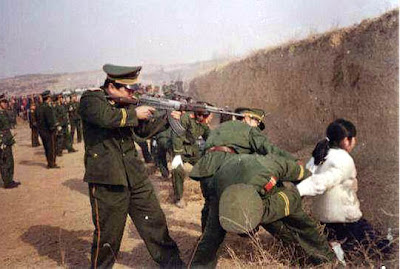 The grainy picture above, of uncertain age, shows one of the delightful ancient traditions of the Chinese government – a firing squad for Tibetan prisoners. The rest are too horrific to show.

But, of course, such barbaric rituals are now redundant. Instead, the government has acquired a fleet of modern "execution vans" – built with the aid of an Italian company. These are parked outside the courts ready to act the moment a verdict is handed down. The record is seven minutes between sentence and execution. 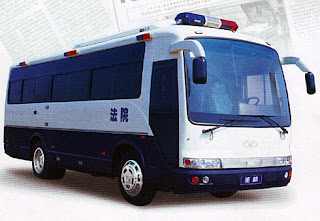 The merits of such a procedure are obvious. A lethal injection preserves the vital organs allowing the bodies to be rushed to the local hospitals where the organs are extracted for use in the growing trade in spare body parts, "donated" by their former owners to a health service which is not available to ordinary Chinese.

This is the country to which the great and the good will flock for the opening of the Olympics in a few weeks time and it is that self-same country which Booker highlights in his column today - the supporter of that bloody dictator in Zimbabwe, Robert Mugabe.

Picking up on our work, Booker reports on how Mugabe is now the proud owner of a palatial £4.5 million mansion in Harare and a similarly lavish country hideaway, each fitted with the latest electronic security systems, including anti-aircraft missiles.

Thus he highlights that which our revered foreign secretary fails to point out – that the corrupt and violent Zimbabwean regime is bolstered by a similarly corrupt and violent regime in China, all on the back of shady trade deals, raping the mineral wealth of the continent.

The point which Booker makes so powerfully though is the contrast between this and our own Government's response to Mugabe's tyranny. Since Zimbabwe is included in the 28 areas of "common foreign policy" we have ceded to the EU, we can do nothing except in conjunction with our EU colleagues.

Last Monday we saw the humiliating spectacle of Gordon Brown pleading with the EU's President, Nicolas Sarkozy, to add 36 more names to the list of Zimbabweans on whom the EU has imposed pathetically ineffectual "personal sanctions" and, this week, we are to see Gollum (aka David Miliband) creeping over to Brussels to ask his fellow EU foreign ministers to cement in a deal which simply goes to underline our impotence. 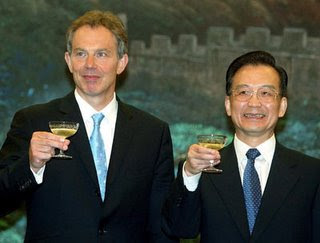 Meanwhile, we remind you once again of the state of play between the EU and that wonderful, liberal society that is China. This, as readers will recall, was articulated during Tony Blair's visit to China in September 2005, in his capacity as EU president. Then, at the 8th EU-China Summit, he signed a joint statement with Chinese premier Wen Jiabao, part of which said:

This was the infamous agreement which made the EU and China "strategic partners". Writes Booker, it is only too obvious which "partner's" strategy is proving the more successful.