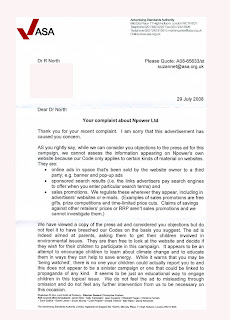 Having sent a letter to the Advertising Standards Authority about the attempt by npower to recruit children to become "climate cops" and root out "climate crimes" we have received an incredibly swift response.

The reply (illustrated – click to enlarge) comes from "Complaints executive" Suzanne Thomas who wastes no time telling us that "we have viewed a copy of the press ad and considered you (sic) objections but do not feel it have (sic) breached our Codes on the basis you suggest." She then goes on:

The ad is indeed aimed at parents, asking them to get their children involved in environmental issues. They are then free to look at the website and decide if they wish for their children to participate in the campaign. It appears to be an attempt to encourage children to learn about climate change and to educate them in ways they can help save energy. While it warns that you may "being watched", there is no one your children could actually report to and this does not appear to be a sinister campaign that could be linked to propaganda of any kind. It seems to be just an educational way to engage children in this topical issue. We do not feel the ad to be misleading through omission and do not feel any further intervention from us to be necessary on this occasion.

The interesting thing about this is that we did not actually frame a complaint to the ASA. We wrote asking for their assistance in framing a complaint – a rather less than subtle difference – not least because we were aware that there could be multiple issues involved.

But, so keen is the ASA to exonerate npower - it would seem – that they have rushed to adjudicate on the very limited basis put to them, without exploring any further issues.

They could, for instance, have looked at their own rule 47.2, which states that: "Marketing communications addressed to, targeted at or featuring children should contain nothing that is likely to result in their physical, mental or moral harm."

More particularly, rule 47.4 then states: "Marketing communications addressed to or targeted at children: a) should not actively encourage them to make a nuisance of themselves to parents or others and should not undermine parental authority".

These are rules specifically applicable to children, but there is also rule 49.5, applicable to environmental claims. This states that: "The use of extravagant language should be avoided, as should bogus and confusing scientific terms. If it is necessary to use a scientific expression, its meaning should be clear."

Taking these in turn, we argued on the forum that:

1. the designation of certain lawful actions - desirable or not - as "crimes" is an unwholesome distortion of our moral code. It confers moral equivalency between not turning off a light and, say, shoplifting or vandalism. It seeks to impose a moral judgement on a normal activity, blurring the line between something which is lawful and something which is not. This confusion, especially when children are the focus, cannot help define and communicate our moral code, with which many children have only a distressingly limited acquaintance;

2. the recruitment of children to pass judgement on their parent's "crimes" is wholly malign, not least in undermining the authority of adults;

3. in that the campaign seeks to align children with an external agency, which is setting the parameters by which the children should judge their own parents and other adults, it creates an alternative authority which purports to be superior to that of the parents and other authority figures. That is confusing to the child, and also creates a potential area of friction ...;

4. not only does the campaign encourage the child to believe it has the moral right to pass judgement on the behaviour of parents and other adults, it actively encourages the child to "enforce" that judgement, distorting the normal relationships between adults and children.

5. by asking the child to record the "crimes", it undermines the bonds of loyalty which should exist between child and family. The children are being encouraged to put the notional and highly contentious objective of "saving the planet" above that of family cohesion and loyalty.

This would seem to be covered by quite adequately by rules 47.2 and 47.4. There would thus, on the face of it, appear to be a clear breach of the code.

As to rule 47.4 specifically, we have now an article from the Islington Tribune, where we have an npower spokesman happily admitting that: "I don't apologise if a bit of pester-power goes home with the kids but I don't see George Orwell looming round the corner."

Notwithstanding the "George Orwell" bit, there is quite clearly an admission here that the intention of the campaign is to employ "pester power". This, by any other description, is an attempt to "…encourage them [children] to make a nuisance of themselves to parents or others …".

And then there is rule 47.2. Here, we would point to the injunction in the advertisement which effectively, enjoins their "climate cops" to "save the planet this summer". Whatever else, we would have difficulty in accepting that any of the activities to which the "climate cops" are directed could actually "save the planet", to which effect, is not the language a tad "extravagant"?

Anyhow, in the ASA's opinion, this "… seems to be just an educational way to engage children in this topical issue."

We have made our views known to the ASA, and will keep you all posted.