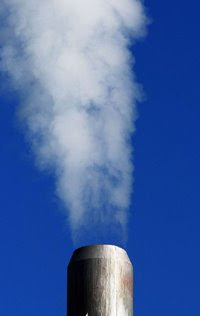 It was yesterday that we saw reports of MPs calling for a multi-billion pound windfall tax, to "top slice" utility companies' profits allegedly made from the EU's emissions trading scheme (ETS) for carbon dioxide. Yet, unacknowledged by those self-same MPs, moves are already in place for the government to grab the income from the scheme.

The ETS itself is that mad scheme whereby the EU member states have agreed maximum carbon dioxide emissions which specific industries in each member state can produce each year, then awarding to individual enterprises permits for given tonnages of emissions. To date, since the scheme started in 2005, these have been given out free of charge but companies which exceed their individual quotas have to buy permits for the excess, from companies which under-produce (via brokers).

In theory, electricity companies have been able to make millions of pounds a year in "windfall" profits from this sceheme, being allowed to pass on the notional costs of their permits to customers in higher charges. And it is those millions which the MPs want to target.

However, there is serious argument as to whether the income derived actually represents additional profit. The case is made that, since the generators work to basic margins on their sales, had they not been able to benefit from the free permits, electricity prices would have gone up even more than they have already.

This notwithstanding, from this year, the EU is allowing member state governments to auction off up to a third of emissions permits allocated to electricity companies. This will be a nice little earner for Gordon Brown, the Financial Times estimating that it will bring him in nearly £2 billlion over the next four years, after which the first phase of the scheme comes to an end.

Come the next phase, which starts in 2013, the government is likely to be an even greater beneficiary, standing to make about £2 billion a year from auctioning permits, if the power sector is forced to buy all its permits as the EU commission proposes.

According to the FT, though, this should not increase electricity prices to consumers, as the costs have already been factored into to current prices. But this optimism may be misplaced. The electricity industry has to find upwards of £100 billion in new investment to fund improvements in generation capacity and infrastructure and, if the government is set on taking £2 billion a year out of the industry, that shortfall will have to be made up from somewhere. And, in the way of things, that "somewhere" will be our pockets.

What makes this even more reprehensible, however, is that the current price of an emissions permit, at around £25 per ton, is generally acknowledged to be insufficient alone to incentivise switching to low emissions technology such as nuclear generation – which was the whole point of the scheme in the first place.

On the other hand, the abstraction of large sums of money from the industry and the variability in costs of emissions permits actually deters investors, and adds to the confusion on energy policy.

Shorn of any economic or other rationale, that makes Gordon's latest cash grab little more than just another stealth tax, this one made all the more malign for having been legitimised by the European Union.