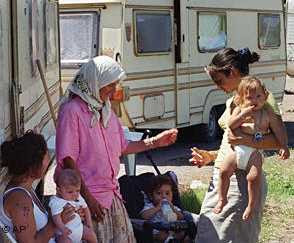 Rarely does the BBC front a news bulletin with affairs EU. So when, yesterday evening, BBC Radio 4 gave the EU parliament pole position and then went on to do a lengthy feature, one could easily imagine that some major crisis was afoot.

However, one should never underestimate the "social-liberal" conscience of the Beeb, so it should have come as no surprise that what brought it to the barricades was the latest development in the Italian "war" against the Roma.

What has happened now is that the Italian government has decided to fingerprint the residents in the 700 or so encampments dotted around the outskirts of major cities such as Rome, Milan and Naples, where an estimated 150,000 Roma live, mainly in squalid conditions.

Although – quite rightly – Berlusconi's government says that this measure is needed in the battle against the surge of crime Italians are experiencing, and to avoid children being used for begging, as well as helping identify illegal immigrants for expulsion, this has attracted the ire of the EU parliament.

By a resolution adopted by 336 votes to 220, MEPs (with 77 abstentions) have called on Italy to bring the practice to an immediate halt and asked the EU commission to intervene against actions which, they aver, "clearly constitute an act of discrimination based on race and ethnic origin". It also "condemned utterly and without equivocation all forms of racism and discrimination faced by the Roma and those seen as 'gypsies'".

Although Italian newspapers have published pictures of officials taking fingerprints from gypsies living in and around the southern city of Naples and filing the prints according to religion, ethnicity and level of education, the Italian government is having none of it.

Franco Frattini, former EU justice commissioner and now Italian foreign minister, has dismissed the parliament's resolution as "European interference". Its claims he says are "a totally unfounded accusation, and the upshot of a political vote", the MEP’s vote being "the fruit of an unawareness of the actual situation".

Seemingly relying on a technicality, he claims that the parliament’s action is directed at "an Italian law that is not yet enacted, because Parliament is still deciding on the bill's enactment." Thus, it was "premature".

Frattini then complains that he had held discussions with the heads of the two most important political groups in the European Parliament, Martin Schulz (ESP) and Joseph Daul (EPP) "to tell them that the Italian government was ready for an exchange of ideas, as normally happens", and to explain the "evolution, contents and grounds" for the norm.

According to Frattini, though, the EU parliament went ahead with its resolution before the discussions had been concluded, even though there was "no substantial interest" from the EU commission in assessing whether Community law had been breached.

This has not stopped Deutsche Welle parroting the BBC line, conveying the idea that the Italian government is engaged in a "direct act of discrimination."

But it also cites Italian European affairs minister Andrea Rochi, condemning the move, declaring: "Today's resolution by the European Parliament is one of the worst aspects of the EU institutions …We reject with vigour and indignation the accusations of racism."

Then we get Italian interior minister Roberto Maroni. He is a member of the right-wing Northern League party, who sets out the objective – "to put an end to illegal camps and guarantee security to Italian citizens."

He and his colleagues thus argue that it is the camps that are being targeted, not people of any particular ethnicity or race. They do have a point in that the camps are occupied not only by Roma but also Sinti. Half are Italian citizens, another 20 percent are citizens of other EU countries while the remainder come from the former Yugoslavia. Most definitely, it is not a Roma therapy.

We seem, therefore, to be seeing a case of the EU parliament rushing in where angels – and the commission - fear to tread. But when we get Italian politicians complaining of "European interference", it is clear that there is no meeting of minds.

Immigration, once again, is beginning to show up as a fault line between the European "ideal" and national interest. And, when the chips are down, even in Italy the national interest prevails.