A chilling tale from North 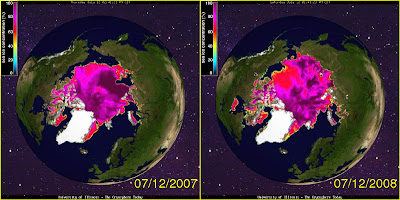 For his third tale today, Booker takes on the warmists full-frontal (again), pointing out that there is nothing that "true believers" like to use more to sustain their faith than a fear that Arctic ice may soon vanish.

Google News last week, he writes, showed 492 articles promoting this scare (now standing at 1,926), after Arctic sea-ice had last September shrunk to its lowest level since satellite records began in 1979.

What the articles didn't tell us (although it can be seen from the Cryosphere Today website) is that ice-cover last winter rose back at a record rate.

Although it is again in summer retreat, there are now 700,000 square kilometres more ice than at this time last year – pictured above. As global temperatures decline, the warmists may have to wait rather longer for that ice finally to melt away.

Yet, it was less than three weeks ago that The Independent was confidently reporting that, for the first time in human history, "ice is on course to disappear entirely from the North Pole this year."

Interestingly, the "warmist" online journal Science Daily is now getting round the inconvenient truth that the ice retreat has slowed by reporting: "Summer Arctic Sea ice expected to be among lowest on record."

This is rather like that old Cold War joke, which had Kennedy and Khrushchev competing in a 100yd race. Kennedy, the younger man, won easily but when Pravda came to report the result, it had Khrushchev coming second and Kennedy second from last.