A climate of deception 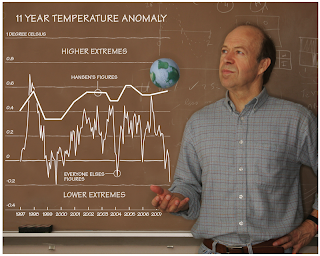 One of the interesting phenomena of our times is the parallel between euroscepticism and "global warming denial": those that are antagonistic towards the European Union also tend to disbelieve the hype on anthropogenic global warming (AGW).

On the other side of the divide, there is also a close relationship between europhilia and belief in AGW, the EU having enthusiastically embraced the dogma of the warmist religion, not least because of the opportunities it affords to pursue the integrationalist agenda.

But there is another link. As is the EU built on a foundation of deception, so too is the global warming hype, so much so that it has become not "climate change" but a climate of deception.

One strand of that deception is brought home to us to day in the Booker column, which highlights to extent to which the great climate change guru James Hansen, of Nasa's Goddard Institute for Space Studies (GISS), is manipulating temperature figures to promote his own beliefs and to pursue what is quite evidently a political agenda.

What is fascinating about this is that Hansen's data manipulation brings home an essential truth about modern politics: he who controls the statistics controls the high ground. It does not matter what the reality it – what matters is how that "reality" is portrayed.

We actually saw this in graphic form right at the beginning of the modern "scare" cycle, with the great "salmonella in eggs" scare. Then, the public perception was greatly influenced by the appearance of a new database on salmonella food poisoning, produced by a certain Dr Bernard Rowe of the then Communicable Disease Surveillance Centre.

Almost as a free-lance operation, in 1987, he started producing his own weekly digest showing what appeared to be a massive upsurge in food poisoning outbreaks, to which he – and he alone, in the early stages – was able to attribute a cause. And it was that database which provided the raw material which was to fuel the salmonella scare which dominated the media through late 1988 and early 1989.

That is not to say that there was not a problem with salmonella at the time, but it was the ability to shape the data which allowed Rowe, behind the scenes, to turn a statistical phenomenon into a highly political agenda.

To demonstrate the power of the figures, while the UK media in 1999-9 was dominated with scare stories about food safety, based on statistics produced by the ever-willing authorities, back in Holland, which had and even bigger problem with salmonella, there was no such diet of scares.

The way this was managed was breathtakingly simple and ingenious. While, in the UK, salmonella food poisoning was a "notifiable disease" which meant that all cases had to be reported to the authorities, the Dutch authorities made sure that this did not happen.

What they did in fact was change the law on diagnosing and reporting salmonella food poisoning, in a devilishly clever series of moves. Firstly, while the laboratory service to doctors for identifying the presence of salmonellas in patients was free, they introduced swingeing charges for identifying the type of salmonellas involved. Then, they introduced a rule that said salmonella notifications could not be included on the official database unless the isolations had been typed.

The entirely predictable result was that, while doctors continued to use laboratory services for basic diagnosis, to treat their patients they did not need to know the type of salmonellas involved, and stopped calling for typing information. The consequence was that, while the reported incidence of salmonella food poisoning was rising everywhere in Europe (and America), the Dutch authorities were able to show that their figures were falling. And, with an apparently declining incidence, there was no material to fuel a scare.

So it is with James Hansen. As long as he has control of an apparently authoritative dataset which shows that global warming is increasing, he can sustain the climate change scare. And, as Booker observes, it is on his alarmist figures that our politicians are basing all their proposals for irrevocably changing our lives.

Thus builds the "climate of deception", based on a strategy that is now becoming completely transparent. But, as long as the hard-core warmists, the media and politicians continue to give Hansen's tarnished figures their credibility, this dangerous man will get away with it.