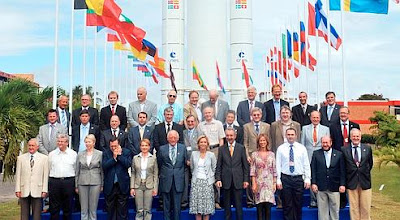 Courtesy of the invaluable Open Europe daily press digest, we learn from Le Figaro that the "colleagues" have been plotting their next moves in developing a fully-fledged space policy, with a decision to allocate space spending a specific "budget line" in the EU budget.

This took place during a meeting in Kourou, French Guiana, home of the French Ariane space rocket launcher, where 27 ministers from EU member states warbled happily about wanting to make Europe "a global actor" in space policy.

Proclaiming that, "Space is a powerful catalyst for European integration", EU commission vice-president Günter Verheugen, called for "increased funding" allocated to space and for a "clarification" of the funding. However, the real money will not flow until 2013, when the next multi-annual budget period starts.

Nevertheless, Le Figaro reports that the decision to allocate the budget "seems irreversible", even though the space policy has no legal mandate unless or until the constitutional Lisbon treaty takes effect – something which the "colleagues" still cannot guarantee.

Despite this, they have been pursuing their policy ever since 2004, after it had been included in the failed constitution, progressively building their policy infrastructure without so much as a blush.

The fact that the EU is going ahead regardless, therefore, represents yet another manifestation of their contempt for us, the people who will ultimately have to pay the bills for their grandiose ambitions.

The only thing that really matches the arrogance of the "colleagues" is the complete indifference of the British media, which has consistently failed to take note of the gradual development of a massive new competence of the EU, the cost of which will eventually run to many billions – of which the French will be the ultimate beneficiaries.

No doubt, in due course, the BBC will wake up and produce a gushing documentary about the wonderful new European space policy. One suspects, though, that its title will not be "Cost in space".