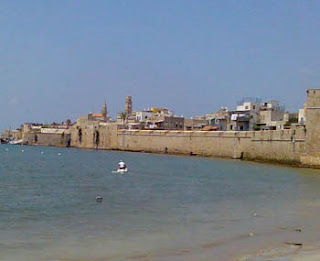 Many a happy hour was spent wandering through the old town – a kaleidoscope of smells, sounds and sights that never failed to entrance. And now, according to The Daily Telegraph, the EU has banned it. Never more Acre, it must from 2010 become Hectare, although there is no word as to whether the town will have to increase its size by two-and-a-half times.

This was, incidentally, the date when we were to go fully metric, with the abolition of all supplementary measurements – so that it would have become a criminal offence for a trader, even by way of information, to tell shoppers the Imperial equivalents of the weights of goods they were buying.

This was also to be the date on which the pint disappeared but the EU, conscious of the PR disaster which awaited it, backed off from this high profile measure – although we can no longer buy pints of milk in our shops.

But, true to form, in its sly, underhand way, it works at the margins, gradually eroding the very basis of our national identity. All the time it tells us it is celebrating diversity, while doing its best ruthlessly to eradicate anything which is distinctively national.

One wonders, though, whether the Israelis have been informed of the change, and whether the travel agents are preparing to change all their brochures, on pain of being locked up for using the soon to be prohibited word.

Mark Francois, the Shadow Europe Minister said: "It is this kind of pointless interference into the nooks and crannies of our national life that frustrates people about the EU. Whether we use hectares or acres should be a matter for Britain to decide, not the EU."

And who got us into this mess?