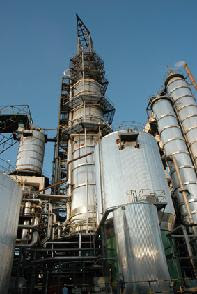 The grumbling has been around for some time, but now Spiegel tells us that German industrialists are, to coin a phrase, getting a bit Bolshie.

In a piece headed, "Killing Jobs to Save the Climate", it warns that the price of European emission permits is rising so rapidly that German companies are threatening to leave the country. Thousands of jobs could be lost. And the environment may, in the end, be no better off.

Bringing this to life, author Karsten Stumm describes a seminar given by the German environment authorities, attended by sundry industrialists:

They sat silently through two lectures, but then they couldn't control their anger any longer. The civil servants from the Environment Ministry, the Environment Agency and the German Emissions Trading Authority made it sound easy for industry to take up carbon trading. It was just too much for the managers to tolerate.

"If that's the shape the trading will take, we will simply move our cement operation to Ukraine," a cement factory manager shouted into the lecture hall. "Then there won't be any trading here, nothing will be produced here anymore - the lights will simply go out here."

Bizarrely, the businessmen's anger surprised the emissions-allowance trading experts – although that in itself is indicative. Industry has been flagging up its disquiet for some time.

Anyhow, the experts had invited industry representatives to a relaxed forum at the Environment Ministry's office in Bonn. They wanted to present international developments in the carbon trading market. However, Karsten Stumm writes, the mood in the German business world has soured - managers no longer have the stomach for academic lectures:

The reason is that emissions allowances are already burdening some companies that require a lot of energy for production purposes.

In the last 12 months alone, the price for the right to pump a ton of carbon into the atmosphere has shot up from €23 ($36.5) to nearly €30 ($47.6), according to the European Energy Exchange in Leipzig. This hike of around 30 percent has a direct effect on the electricity production of power companies.

We are told that, according to calculations by Point Carbon - a Norwegian company that specialises in analysing global power, gas and carbon markets - this price hike would drive up the marginal cost of energy from an old brown coal power plant by the entire price of carbon.

For modern natural gas power plants, it would increase prices by a third. Energy company RWE, which is based in the German city of Essen, reckons it alone will have to pay €9 billion ($14.2 billion) for its own electricity production, which it, of course, will pass on in higher electricity prices.

This latter-day "snake oil" emissions trading system will, therefore, have a direct impact on which countries in which firms chose to locate.

Warns Andreas Kern, President of the German Cement Industry Federation: "If the cement industry is gradually pulled into the trading of carbon emission allowances, companies will move production to countries that don't take part in the scheme."

Worse still, this is only the start. When the third trading period starts up in 2013, prices will escalate as emission permits are auctioned. The cement industry will face cost increases of around €900 million - around half its current annual revenues.

The German finance ministry is looking into whether some sectors should continue to receive the emission permits for free, worried by the prospect of an exodus of industry. The Federal Statistical Office and the Institute for Applied Ecology expects a whole raft of enterprises to be affected, ranging from chemical manufacturers, the iron and steel sector, lime producers and aluminium smelters and refineries might be affected.

Yet, the movement will, of course, not result in lower overall emissions – the emissions will simply be relocated. The net effect of the "CO2 price signal" therefore is to shift production and investment. On the other hand, thousands of German jobs will be jeopardised – unless other countries can be inveigled into joining this economic suicide pact.

But, as it stands, not even the German exchequer will benefit. Although it has gained a windfall of €525 million from the emission trading scheme in the first half of this year possibly rising to €900 million for the next six months, this sum would not even cover a fraction of the fall in tax revenues from thousands of job losses which may result from the scheme.

Gradually, therefore, the costs of this obsession with "tackling climate change" are beginning to sink in. Soon enough, it will dawn on the politicians that this gigantic scam is indeed nothing more than an economic suicide pact. And what will the EU commission do then?