What will be Zimbabwe's future? 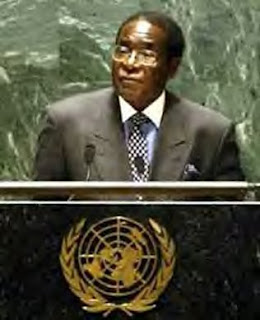 Some people would argue that Zimbabwe has no future – the country has effectively collapsed and its population, for the most part, barely manages to exist, while its tyrannical president and those close to him are leading a luxurious life, thanks to the Chinese control of platinum production and, let us not forget, to the ever gullible West that keeps providing him, his friends and relations with money and platforms for his poisonous attacks.

However, the truth is that there is always a future, though in the case of Zimbabwe it is anything but bright. As I mentioned before, few things are more depressing than attending discussions with people who are knowledgeable about that country.

For all of that, both my colleague and I write about Zimbabwe not just because it is one of the real horror stories in the world at the moment but also because the country has become a symbol, a distillation of all that has gone wrong with many parts of the developing world, particularly Africa and of all the mistakes that the West has made and continues to make, not least because of the activity of the NGOs and transnational organizations.

Yesterday the International Policy Network (IPN) held another lunch-time discussion about Zimbabwe. This time it was led by Rejoice Ngwenya who is the Director of the Coalition for Market Liberal Solutions in Harare – a brave and optimistic man. Well, he is alive and can even get some money from the West to help his mother and buy food for himself.

It was rather good to hear from Mr Ngwenya about the importance of the economic collapse, engineered to a great extent by Mugabe himself and the various placemen in the establishment. For example, there is a 10 million per cent inflation in the country, which makes any discussion of living standards a sick joke. This was caused largely by the Reserve Bank printing a great deal of money in order to finance the government’s debt and to ensure that the ruling elite had its wealth to play with.

How is one to overcome this problem on the assumption that there will be a post-Mugabe future for the country? How is any trust in the currency to be restored? Normally, a huge inflation of this kind has to be stopped by a ruthless reform by a government: the introduction of another currency or a deliberate recalibration of the existing one so the number of noughts is reduced from, say ten to one. When will Zimbabwe have a government that will be able to carry out such a procedure and what can be done in the country without it?

Priority, Mr Ngwenya asserted, will have to be given to the restoration of productivity (and let us not forget that Zimbabwe used to have a successful economy), the reversal of the catastrophic brain-drain as well as the above-mentioned restoration of faith in the currency and in any political process.

As is clear from the title of his institute, Mr Ngwenya is a free-marketeer who sees the roots of many of his country’s problems in President Mugabe’s consistent socialist policies. The trouble is that the MDC under Morgan Tsvangirai (a brave man but not one who inspires one with great faith in his economic and political abilities) is also a socialist though of the social-democrat variety. Can one, therefore, expect anything useful from the party if it ever comes to power?

There were many other problems and issues raised both by the speaker and the audience. The role of Thabo Mbeki and South Africa, for instance; the need to take into account in the future the sizeable Mugabe constituency (I must admit that sounds like whistling in the dark – should the man ever die, there will be a great settling of scores and it will not be pretty); the fact that the education system has disintegrated. Schools cannot afford to function with the inflation and so there is no education.

This is extremely bad for the future of the country. While I share (up to a point) my colleague’s obsession with roads (well, it’s better than those shiny toys) I cannot dismiss schools as being of lesser importance. One of South Africa’s problems at the moment is that boycott of schools that the ANC enjoined on the townships from the eighties onwards. A generation or two of uneducated, unemployable, highly volatile youngsters is a disaster for any country.

Let us not forget our own involvement in Zimbabwe’s catastrophe. It was Lord Soames that presided over the Lancaster House Conference in 1979 that gave Robert Mugabe power, which he used to destroy all rivals, all opposition and to launch a war against the Ndebele in Matabeleland. While the killing went on, Robert Mugabe was feted in the West as one of the most progressive African leaders.

Nor was there a great deal of interest or cutting off completely unnecessary aid when President Mugabe involved his troops in wars and civil wars around him, invading DR Congo in the 1990s. Not much was said even in criticism when he passed anti-business legislation and it is only in 2000 when, in response to a re-forming opposition movement he gathered the so-called war veterans to spread terror and anarchy and to destroy white-owned farms (as well as black-owned ones and the black workers on them) that the first feeble protests were heard.

They were not up to much. One mention of the word colonialism sent all protesters scurrying into hiding. Even those famous bans on travel have come to nothing as we have pointed out before. Oddly enough, I think President Mugabe cares very much about being invited to various international shindigs, be they African Union meetings, UN gatherings of one kind or another or the EU-Africa Summit. Banning him from them may not sound particularly harsh but it would cause him a good deal of grief. Furthermore, other African dictators might rally round, refusing to attend all those extremely expensive and completely pointless meetings and that would be all to the good.

What Zimbabwe has now is state-sponsored anarchy with bouts of extreme violence. Mr Ngwenya showed some pictures of what happens to people who oppose or are thought to oppose ZANU-PF. You will be glad to know that I do not have any pictures like that. Nor do I propose to quote some of the descriptions I have read in the last few months of what Mugabe’s thugs do to oppositionists and their families.

What of China some of us asked? My colleague has written highly illuminating posts on the subject of that country’s involvement in Africa. Interestingly enough, Mr Ngwenya was less concerned about it than we had expected though that may be because even China is not risking too much in Zimbabwe. Her involvement in DR Congo, for instance, is far greater.

According to Mr Ngwenya, China is not likely to make any long-term investments in Zimbabwe. It is heavily involved in the retail and it sounds like the only things that can be bought in the country are those imported by China. At other times a complicated system of barter or personal importation with great difficulty from surrounding countries take place.

The exact details of Mugabe’s agreements with China are still unknown but it is unlikely that they would in any way benefit the people of Zimbabwe. China is owed a great deal of money and this is being extracted via the platinum mining rights, as explained by my colleague. Mugabe receives a percentage and lives the high life off it while the rest of the country staggers on, occasionally helped out by bits of aid from us.

What is one to make of it all? Is there anything remotely not-too-dark for Zimbabwe in the short, medium or long term future? Can’t see anything immediately though the presence of people like Mr Ngwenya does give one some grounds for hope. Can we do anything? Not immediately, except giving support to the people who can possibly make some change. But we can, at least, try to do no evil. How about not sending any more aid to Robert Mugabe or any other bloodthirsty kleptocrat? It would be a small step but one in the right direction.
Posted by Helen at 01:09