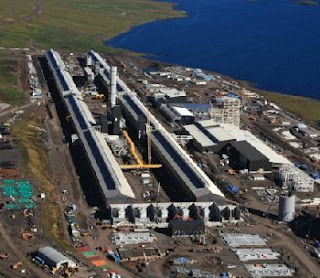 While European Union member states, individually and collectively, seem intent on wiping out their productive economies through their regulatory obsession – in the main "guided" by global warming paranoia - there is a comfortable assumption that affected industries can move to more benign regulatory environments. Alternatively, we can take up the slack by importing primary commodities (or finished goods) from elsewhere in the world.

Certainly, we have seen industries like cement production and aluminium smelting – caught between the vice of the EU's emission trading scheme and higher energy costs, top-loaded by diverse climate change levies – threatening to relocate. But, it seems, this is not by any means an easy option. Productions systems around the world are undergoing their own stresses and there may be very little spare capacity to make up for the EU's determined bid for economic suicide.

That, at least, is one possible inference from a very recent Reuters survey on copper and aluminium production. This tells us that "sluggish copper mine output and disruptions in Latin America" have wiped out an expected surplus this year, while energy supply problems have cut a predicted aluminium surplus.

The agency's findings are based on a poll of 22 commodity analysts around the world carried out over the past month. It shows the 41-million-ton per year aluminium market only produced a slight surplus of 148,500 tonnes in 2008 compared with 325,000 in the January survey and, for 2009, the market is expecting a deficit of 144,500 "due to power problems". Similarly, the copper market is in deficit to the tune of 68,000 tonnes this year versus an expected surplus of 160,000 January.

Inherent problems have been exacerbated by a strike in Peru, the world's second largest copper producer, taking futures prices to a record $8,940 a tonne in July. Strikes have also hit the world's number one producer Chile, and there has also been a cut in production from China.

Equally worrying is the energy-intensive aluminium industry. A shortage of electricity in China and South Africa reduced the expected surplus in both 2008 and 2009 and, when energy accounts for 45 percent of the production of aluminium, tightness of supply cannot help but have a knock-on effect.

In isolation, this survey is bad enough but we also see another report forecasting a 100 million tonnes shortfall of coal in South Africa by 2017, unless the government takes urgent action to secure local supplies.

The South African state electricity company generates about 87 percent of its power from coal and the government may restrict exports to ease a national power shortage. The country is the biggest supplier of coal to European power plants and there is growing demand from India.

Electricity supply difficulties in South Africa are by no means new and, last March, Barclays Capital was reporting that a "global shortage of electric generating capacity" was "dramatically curbing world metal production" - amounting to just under 1 million tons.

Aluminium, in particular, is singled out. Production has been the hardest hit by the world-wide shortage of electric generating capacity, with Barclays estimating that this year alone, shortages of electricity have caused the loss of nearly 800,000 tons of aluminium production.

South Africa was one of the problem countries, alongside Brazil, Chile, Indonesia and Thailand, all of which had "critically low levels of power reserves," leading Barclays to suggest that the shortage of production was "a trend expected to continue for years." The result would be a sustained commodity price hikes.

In South Africa, the electricity supply problems also extend to the production of precious metals, placing supply constraints on gold and platinum. These are also driving up prices in this sector and power is rationed and mines are being forced to make unscheduled shut-downs.

And, what is troubling South Africa also extends to the rest of the continent. Last year, IHT was reporting that energy shortages were hampering development throughout Africa, with frequent power outages being experienced in Zambia and perhaps 25 of the 44 sub-Saharan nations face crippling electricity shortages. This, some experts are saying, is an "unprecedented" power crisis.

With all this happening around the world, messing around with our own power supplies, and driving major production plants offshore by a surge of regulation, does not seem the most intelligent strategy that one could devise. In the context of what appear to be global supply constraints, more enlightened administrations might want to be considering actively encouraging the retention of strategic industrial capacity.

Instead, though, we have the European Union and a claque of member state leaders in the thrall of a shared obsession, determined to add to the crisis rather than relieve it.