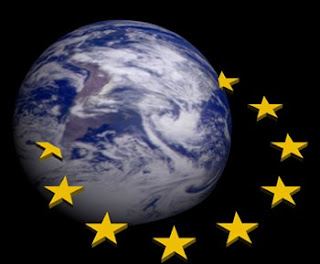 Unless it is about the misuse of MEPs' expenses or other venality, you can almost guarantee that the British media will ignore the EU parliament – although there are some exceptions.

Not so Deutsche Welle which noted last week that: "European Parliament Approves Military Use of Galileo Satellite", telling us that it approved "the bill" by a massive 520 votes to 83.

Actually, the paper is a little confused. It was not a "bill" but an "own initiative report" by German MEP Karl von Wogau – a man we have met before, a doyen of the "European" defence establishment.

An own initiative report carries no legislative weight but, as we have remarked before, von Wogau, is no ordinary MEP. He is a respected member of the German political establishment, a senior and active member of the EPP – the political group to which the Conservatives still belong – and an arch "federalist" who is at the leading edge of integrationalist thinking. His agenda very much represents the thinking and ambitions of the hard core supporters of European integration.

Therefore, his report does actually carry some weight, effectively representing a statement of the state of play, the EU's "shopping list" and an indication of the direction of travel.

The reference to Galileo is instructive, as it simply affirms that which we have been asserting for four years – in the face of constant denials that the programme was anything other than entirely civilian, for civil use only – that the only way the project made sense was for its military applications.

In many ways, this bland – largely unrecorded - affirmation by the EU parliament typifies the whole of the EU "project". Like the EU, the rationale of Galileo has been shrouded in lies, deceit and obfuscation and now, only when the "colleagues" have finally got their way, with the project under commission control and an EU budget line, do they shamelessly admit the truth, which had largely been acknowledged anyway.

But von Wogau's report goes far beyond Galileo and sets out the entire strategy for an integrated European space programme, taking in surveillance and communications satellites, and all manner of space hardware. These, he asserts, should be managed within the framework of a Union budget – to add to the €5 billion already set aside in the 2007-13 for space projects and defence – all dedicated to servicing the European Security and Defence Policy.

Without so much as a blush, von Wogau relies entirely on the constitutional Lisbon treaty, which formalises space policy as a Union competence, in anticipation of which, the "colleagues" already have a Space Council up and running.

How easily do they now claim that "an autonomous European Space Policy a strategic necessity," underlining the "importance of the space dimension to the security of the European Union and the need for a common approach necessary for defending European interests in space."

What is particularly bizarre about this whole affair though is the lack of interest by the British media – which maintains its indifference to this day – as a major new policy unfolds in front of its very eyes. Even when the "colleagues" are openly parading their military ambitions, and outlining their plans to commit billions in expenditure for something which, as yet, has no legislative base, there is almost complete silence.

Secrecy in EU affairs, there is not. But, given the myopia of the British media, there is no need for it. Even though in plain sight, the steady march of integration is ignored.