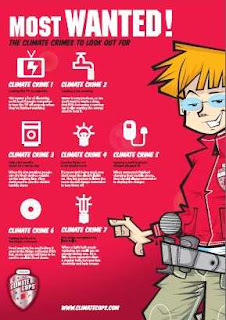 Can I be the only one more than a little disturbed by the latest campaign to be fronted by energy company npower?

Launched today with large colour ads in the Sundays, it appeals directly to children, urging them to enlist as "climate cops", to root out "climate crimes", and thus "save the planet".

In a luridly-designed website, mimicking the style of "yoof" cartoons, it offers a bundle of downloads, including a pack of "climate crime cards", urging its recruits to spy on families, friends and relatives, inviting each of them to build up a "climate crime case file" in order to help them ensure their putative criminals do not "commit those crimes again (or else)!"

Quite what the "or else!" should be is not specified, but since the "climate cops" are being encouraged to keep detailed written records (for those who can read and write), there is nothing to stop these being submitted to the "Climate Cops HQ" for further sanctions, the repeat offenders being sent to re-education camps. And for those "climate cops" that successfully perform the "missions" set (or turn in their own parents), there is the reward of "training" in the "Climate Cop Academy". 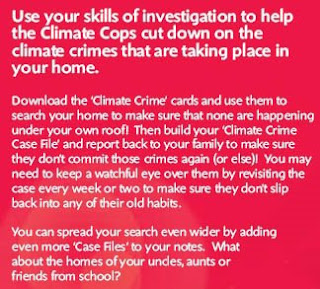 In a system which has echoes of Hitler's Deutsches Jungvolk movement, and the Communist regime Pioneers, perhaps successful graduates can work up to becoming block wardens, then street and district "climate crime Führers", building a network of spies and informers.

How nicely this ties in with James Hansen's call to put the chief executives of large fossil fuel companies on trial for high crimes against humanity and nature, accusing them of actively spreading doubt about global warming.

No doubt, with a willing band of "climate cops", the prosecutors can spread their nets wider, reaching into the homes of all climate change deniers, until the insidious virus of doubt is exterminated (final solution, anyone?). Then we can all march on the sunlit uplands of a "carbon-free" planet – to the tune of Ode to Joy no doubt.

A complaint to the (UK) Advertising Standards Authority is being actively considered. However, it is not entirely straightforward. More details here.

If you have any doubts as to why this is dangerous and offensive, see here, and see also comments on Watts up with that.