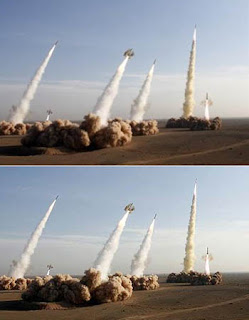 … that it had test-fired a long-range missile, capable of reaching Israel and US troops in the region. This was according to yesterday's Washington Post, a move which was "promptly condemned by the Bush administration" as heightening tensions over the country's suspected nuclear weapons programme.

Interestingly, a number of agencies and media sources have carried photographs of the claimed firing, which took place within a salvo of nine missiles fired simultaneously. Yet, the photograph looks remarkably similar to that taken in November 2006 (top of pair) when Iran claimed to have undertaken a similar exercise. If the media are simply re-cycling stock photographs, though, none of them seem to have pointed this out.

Anyhow, while the US has been forthright in its condemnation of this piece of sabre-rattling, not so the EU which, so far, has been silent, despite it triggering a new spike in oil prices and a further weakening of the dollar.

Secretary of State Condoleezza Rice called Wednesday's tests "evidence that the missile threat is not an imaginary one," adding, "Those who say that there is no Iranian missile threat against which we should build a missile defense system perhaps ought to talk to the Iranians about their claims."

This, of course, follows the signing on Tuesday by Rice and Czech counterpart Karel Schwarzenberg of a deal allowing the US to base a missile defence shield in the Czech Republic, so there may be some self-serving rhetoric here. The US Department of Defense, on the other hand, said it was studying the test to determine exactly what was launched and what it shows about Tehran's missile capabilities.

That actually makes a serious point about the EU. While it has its pretensions about being a major player on the world stage, every time there is an incident like this, the "colleagues" are caught flat-footed. They have to go away to consult with each other in order to establish a "common position" and gauge their responses so as not to offend any of the member states.

Short of the EU acquiring supreme power in the foreign affairs field, it will always be thus – a reflection of the way the organisation is structured, making it uniquely incapable of responding quickly to events. This is an absolute affirmation of why the EU should not be allowed further (or any) powers over foreign affairs.

As to the headline news from the EU, one of the lead topics is on how the EU parliament has approved a law to force airlines posting advertisements for cheap flights to show the full price, including charges and taxes, at the start of the booking process. That way, we don't have to go all the way through the process in order to find out the real price.

For sure, this is an irritation when booking cheap deals, but one wonders whether this is really an issue for the full weight of the criminal law, creating yet another offence to add to the many thousands which hit the statute book this year.

More to the point, in the absence of the EU's ability to involve itself in the serious events of the day – and long may that remain the case - this is what we are reduced to … a piffling bit of legislation to resolve what, at its most serious, is a very, very minor problem.

It really is no wonder that so many people take so very little interest in the EU, to the extent that the most powerful force most likely to bring it down is boredom. People simply struggle to see the point of an organisation which expends so much of its energies on so little, when there are so many more important things going on.