Another beef and dairy ban? 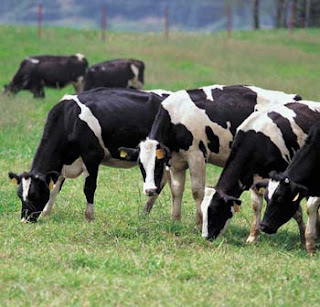 Having completely failed to stem the slow-motion epidemic of Bovine TB in this country, this government – via DEFRA (Department for the Elimination of Farming and Rural Activities) – has thus allowed the export of the problem to mainland Europe, invoking an immediate and unwelcome response.

That, at least, is what The Times is reporting, with the headline, "TB panic leads to new ban on export of British cattle".

This situation came to light when 12 British-reared calves imported to Dutch veal production farms in March tested positive for the disease – in a country which has been free from the disease since 1999.

Dutch farmers are understandably furious and have imposed their own commercial ban on live cattle imports from the UK. Unofficially, Belgian farmers are also refusing to take British calves and adult cattle. The Dutch Agriculture Ministry is said to be appalled at the breach of biosecurity.

Under EU law, of course, farmers are not allowed to do this. It is a breach of one of the most fundamental tenets of Community law – trade discrimination on the grounds of nationality. Thus, to make the ban stick, the continentals are hot-footing it to Brussels to apply for an official ban. British exporters now fear that a complete ban on the trade of live cattle throughout the EU could be in force by next week, an action which could be highly damaging for the British cattle industry.

Kim Haywood, the director of the National Beef Association articulates the concerns, saying: "People are very worried about possible loss of exports because we are just approaching the main three-month season for export of calves for veal production. Following the BSE crisis, the market only started at the end of 2006 but since then we have slowly been recovering markets. It could be a catastrophe for the industry. If this issue builds momentum in Europe, the consequences could be dire. This is all down to the Government's inability to control bovine TB."

Haywood is certainly right about the "government", but the criticism should go further. Animal disease control is an exclusive competence of the EU and the eradication of bovine TB has been a part of Community law ever since 1977, with the promulgation of Council Directive 77/391/EEC – a law that has been updated and amended many times.

This requires those countries which have endemic Bovine TB to implement a Commission-approved eradication programme, the principles of which are set out most recently in a working document drafted in 2006.

This is explored in detail in our sister blog, Bovine TB, but the crucial element of that document is the explicit requirement that, "The reservoir of infection within wildlife populations should be effectively addressed."

This, the British government has manifestly failed to do, having only last week rejected any cull of badgers, despite these animals having been proved to be an important reservoir of the disease. Furthermore, the government has not even submitted a formal disease eradication plan to Brussels – and neither has the Commission followed up what appears to be a clear breach of the rules.

The suspicions are that, because Bovine TB seriously affects only the British and Irish cattle industries, the EU has been indifferent to the problem. But now, chickens – or perhaps cows – are coming home to roost. The commission will no longer be able to ignore what has been a running sore in British disease control strategies.

Not least, there is the brooding presence of the Russian Federation in the background. Two years ago, it was threatening an EU-wide ban on cattle products and, although this did not materialise, the threat remains. Confirmation of Bovine TB on the continent could give Russia just the excuse it needs to ban cross border trade with the EU.

We can therefore, expect a speedy and vigorous response from the EU commission, one result of which may be that it looks more closely at British control measures and starts imposing EU law. In the longer term, that could in fact be beneficial to the industry, if it over-rides the dilatory DEFRA and requires effective action to be taken against the wildlife reservoir.

This absurd situation is also explored further in the Bovine TB blog, but it comes to something that, if forced to choose between the two evils of DEFRA and the EU, the latter could come out better. Possibly to the delight of Europhiles, we would have to concede that there is only one thing worse than the EU. That one thing is DEFRA.