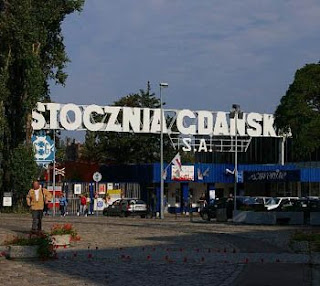 The news yesterday that President Lech Kaczynski of Poland had effectively folded on the constitutional Lisbon treaty came as absolutely no surprise.

Apart from the general tendency of Polish politicians to make a great deal of noise and then give in at the first opportunity, this had been flagged up earlier this month when Angela Merkel had confidently predicted that ratification was just "a question of when".

Anyhow, Lech Kaczynski chose for his moment of surrender a visit to Paris where he met Sarkozy, leaving skid-marks on the Champs Elysée with the abruptness of his U-turn. Not weeks ago he was telling the world that it was "pointless" ratifying the treaty and now he is cosily reassuring the French president: "of course, Poland will not be an obstacle to the treaty's ratification".

Of course … we did not have to look very far for the reason. On the stocks was an EU commission decision, due today, on whether six years of "illegal" state aid paid to the historic shipyards of Gdansk, Gdynia and Szczecin will have to be repaid. Amounting to €2.1 billion, this could bankrupt the yards whose workers helped toppled the communist regime in 1989.

Sure enough, Radek Sikorski, the Polish foreign minister completely denied any connection, adding credence to the belief that nothing is true in politics until it has been denied by a minister.

Thus, completely coincidentally, the news later emerged that, while the commission is indeed going to make its ruling today, it has indicated that it will delay execution for three months. By then, a refinancing deal will doubtless have been stitched up, the details of which we will not be allowed to know until the treaty ratification is safely in the bag.

This rather cast Barroso in the role of the "good cop", having yesterday spent a good deal of time on the phone with prime minister Donald Tusk, stitching up agreeing the details. But there is no such velvet glove treatment for the Irish.

Coming storming out of his corner is that nice M. Sarkozy – nice, that is, to the compliant Poles – in an ugly mood, bluntly declaring that Ireland must hold a second referendum.

With absolutely no attempt at finesse or diplomacy, he told a meeting in his office: "The Irish will have to vote again." And, on Monday, he is due in Dublin personally to deliver his message to the Irish government.

Predictably, Sarkozy's demand was attacked by Declan Ganley, of the Libertas group: "This typifies the anti-democratic nature of what's going on in Brussels," he told RTE radio. Sinn Fein described it as "deeply insulting to the Irish people".

Hilariously, Sarkozy's trip is billed as a "listening exercise". But this is the EU version – "you listen and then do as you are told". The Irish had just better get used to it. "Bad cop" Sarkozy has spoken.