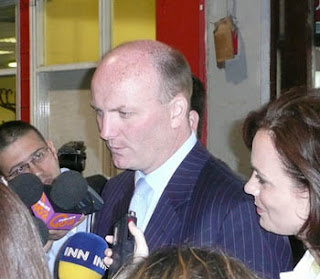 We've been getting rumours for some weeks now that "a personality" was intending to start up a new eurosceptic party, headed by none of the "usual suspects".

Now, it appears that the cat is out of the bag, with an article in The Sunday Telegraph which has the "hero" of the Irish referendum, Declan Ganley, stepping up to the plate.

According to this article, Ganley is planning to field more than 400 candidates for next June's euro elections, in all the 26 countries – including Britain – where voters have had no direct say on the treaty.

The man claims to be starting to raise £75 million from online donations to run candidates in all 12 of Britain's European parliamentary constituencies, and in seats throughout the EU. As his base, he will use his existing platform, Libertas, turning it from a straightforward pressure group into a fully-fledged political party.

Ganley's message is a simple one: "We will tell people that Libertas is the box you put your X in if you want to vote 'No' to the Lisbon Treaty. It's clear, it's simple," he says. "The message will be: we are now giving you a referendum and it's going to take place in June of next year at the European elections."

The Sunday Telegraph thinks this plan "will unsettle the Brussels establishment," but it is more likely – in Britain at least – that it will unsettle the existing parties. Both the Conservatives and UKIP will be pitching for the eurosceptic vote next June. And like Ganley, UKIP has high hopes of turning the election into a referendum on the constitutional Lisbon treaty.

We have, of course, been here before with Jimmy Goldsmith's Referendum Party in the 1997 general election. But, as he had a fighting fund reputed to be in the order of £20 million, Ganley's £75 million spread over 23 countries begins to look rather modest.

Further, Goldsmith captured the mood of the moment – effectively committing both Labour and the Conservatives to a referendum on the euro. Ganley has no prospect of gaining such a clear outcome. Neither – for all his recent fame in Ireland – does he have the charisma which gave the Goldsmith's campaign its initial boost and had volunteers flocking to the colours.

Ganley's biggest handicap, though – at least from persepctive of the hard core eurosceptics – is that he openly supports the European Union, confining his objections only to the constitutional Lisbon treaty, on which platform we are told he hopes his new party will return 80 MEPs to Brussels. But, in distancing himself from the eurosceptic movement in Britain and setting himself up in competition with the Conservatives, he could well find it difficult to make any progress at all.

The worse case scenario is that he could split the vote, making the euro elections something less of a disaster for Gordon than they might otherwise be. Another possible scenario – if his campaign does build a head of steam – is that he could leach votes from UKIP, robbing it of any chance of getting any MEPs at all for the next parliamentary session.