Perhaps they insist on organic milk 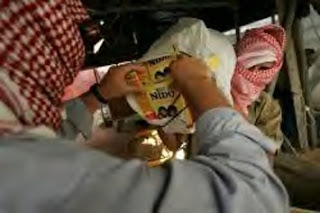 I picked up this story on Little Green Footballs but Charles Johnson, its online begetter, had it from some of his readers. There are some sharp cookies out there reading blogs and websites. Anyway, the story comes in Israel Today together with some highly entertaining pictures, issued by Hamas. For once, our own journalists did not get to the pictures in time to present them as the gospel truth (a particularly apposite phrase as we are talking about that part of the world).

The story and the pictures purport to prove that the so-called smuggling tunnels between Egypt and Gaza (a wall runs along that border but that is rarely mentioned by the reporters) are not used for guns, explosives and "heavy mortar shells, anti-tank missiles and anti-aircraft missiles". Goodness me, how could you think that? Whatever next?

No, they are used by selfless and dedicated Hamas fighters, pictured with their faces hidden, to bring in milk and babyfood. What else could you possibly use such tunnels for?

The Israelis have demanded that the Hamas leadership shut those tunnels down but Ismail Haniyeh, the Prime Minister, refused in a refreshingly honest fashion:

"We cannot talk about stopping smuggling because it is something beyond our ability as a government and we did not give a commitment in this regard," Hamas Prime Minister Ismail Haniyeh told worshippers at a Gaza City mosque on June 25 as the Egyptian-brokered ceasefire was being finalized.

It would appear that Hamas is no more in control of its territory, despite the periodic purge of Fatah supporters, than the latter is in the West Bank where there are also periodic purges.

Egypt has never denied that the tunnels exist and has, every now and then, shut a few down.

But we were all wrong. The tunnels quite clearly exist for humanitarian purposes. Understandably, Israel is a little sceptical. Israelies tend to be sceptical about most things, especially their own leaders, but this time they go beyond that and pronounce themselves to be extremely dubious.

Between 100 and 150 trucks carrying humanitarian aid from Israel and international aid organizations enter Gaza on a daily basis. Out of that number, the 50 or so daily shipments that enter via Gaza's central Sufa Crossing contain milk and baby food, according to the manifests.

A long way from the humanitarian disaster we keep hearing about but, of course, this all contributes to the social and political disaster that Gaza remains. What of the smuggled milk, though? I can only suggest that the Gazans prefer the organic stuff and the nasty Israelis insist on providing them with Longlife milk. Enough to make anyone's blood boil.

ADDENDUM: Actually I wrote "onlie begetter" about Charles Johnson, getting a little carried away with the Shakespearian references but the boss changed that. He doesn't like me getting all greenery-yallery.
Posted by Helen at 00:30