A licence to print money 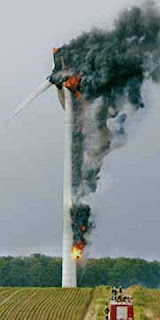 So, Royal Dutch Shell has agreed to sell its stake in the £2.5 billion London Array, the world's largest offshore wind farm, to Eon and Dong Energy, its former partners.

The utilities agreed to divide Shell's one-third stake evenly between them. Eon and Dong will now own 50 percent each.

This, we are told, "will be a relief" to the government, which has put wind at the heart of its renewable-energy agenda. When Shell announced its intention to quit the project in May, there were fears that Eon and Dong, a Nordic group, could scrap it altogether because of the soaring cost of building wind farms. However, the decision by Eon and Dong to buy out Shell means the scheme, already seven years in development, will almost certainly go ahead.

Since Paul Golby, chief executive of Eon UK, had already called the project's economics "marginal at best" as prices for turbines, ships to install them and personnel have soared to record levels, one wonders what might have changed.

The answer, not supplied by The Sunday Times, is to be found elsewhere - the "magic potion" being a change in the arcane subsidy arrangements which turn wind farming into a license to print money.

Uneconomic by any measure, the whole industry is buoyed up by a raft of subsidies and other inducements, in the forefront of which is the Renewable Obligation Certificate (ROC) which requires energy generators to contribute to a pot, paid out to wind farmers for the electricity they produce, thereby overcoming their inherent lack of economic viability.

Thus do we find that offshore wind farms, which are even less economic than their onshore equivalents, are to benefit from a 50 percent higher subsidy, lifting these installations from their "marginal" status into a profitable enterprise.

It is worth, in this context, revisiting a piece published in The Sunday Times last January, headed. "Wind farms turn huge profit with help of subsidies". This tells us that the "lavish subsidies and high electricity prices have turned Britain's onshore wind farms into an extraordinary moneyspinner, with a single turbine capable of generating £500,000 of pure profit per year."

Ofgem is then quoted. Having done its sums, it says: "We calculate that renewable energy subsidies will add £60 to consumer bills this year and that will keep rising." This is nothing more than Booker has been constantly "banging on" about, the latest instalment of his exploration into the fantasy world of subsidy wind farming coming in his column yesterday.

There, he offers "final proof" that Gordon Brown is living on another planet, our revered prime minister having boasted to last week's EU "Mediterranean summit" that "Britain's North Sea could be the Gulf of the future for offshore wind".

The absurdity of this claim is readily apparent when it is realised that the 3,000 giant wind turbines than Brown wants built round our coasts will produce a mere 3,000MW, compared with the single Drax coal-fired power station in Yorkshire, which has a capacity of 3,800MW. Thus the entire output of Mr Brown's "Gulf of the future" would be less than that of a single conventional power station.

Compare also the cost of building his turbines. Estimated at £2.3 million per MW, would be at least £20 billion (the £10 million cost of the solitary 3.5MW turbine recently built in Cromarty, Firth, ran out at £2.8 million per MW), plus the cost of building up to a dozen gas-fired power stations just to provide backup for when the wind is not blowing, and we could get considerably more electricity from two new nuclear power stations at a fraction of the cost.

The trouble is that, if Mr Brown is living on the Planet Krypton, he has, alas, been joined by David Cameron and our entire political class. Not one MP, it seems, dares question a policy the total insanity of which they could work out for themselves just by spending 20 minutes on the internet.

And therein lies the tragedy. The entire political class has bought into the myth of "renewable energy" – or acquiesced - which means the fantasy must be tested to destruction before someone finally pulls the plug. By then, of course, we will not need to do that – there will be no electricity coming though the wires any more, as we sit in stygian gloom waiting for sanity to prevail.