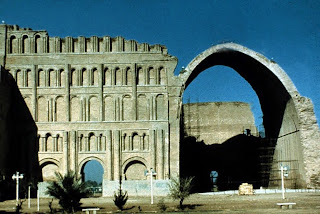 Remember all those stories of Iraqi museums and archaeological sites being looted after the Coalition invasion; all those accusations of chaos brought in by the nasty Americans and their equally nasty allies? Many people do remember them and repeat them. They remember slightly less well that there were subsequent stories - much smaller articles on less popular pages - that a good many of the museum treasures had not been looted but hidden by curators and were now being repositioned.

Of course there had been looting in Iraq - back in the nineties when apparently illicitly lifted treasures appeared in Western arts sales rooms. Except that they had been lifted by members of Saddam Hussein's government.

Now we get an interesting story about the archaelogical sites. Thanks to Clarice Feldman's posting on American Thinker we can read an article in the Wall Street Journal that tells us that stories of those lootings were seriously exaggerated as well.

A recent mission to Iraq headed by top archaeologists from the U.S. and U.K. who specialize in Mesopotamia found that, contrary to received wisdom, southern Iraq's most important historic sites -- eight of them -- had neither been seriously damaged nor looted after the American invasion. This, according to a report by staff writer Martin Bailey in the July issue of the Art Newspaper. The article has caused confusion, not to say consternation, among archaeologists and has been largely ignored by the mainstream press. Not surprising perhaps, since reports by experts blaming the U.S. for the postinvasion destruction of Iraq's heritage have been regular fixtures of the news.

I'll bet it's caused confusion. Almost as much confusion as the acknowledgement by newspapers such as the Washington Post and the New York Times that the surge in Iraq is working and the situation is improving by leaps and bounds. Not to mention caused by the fact that Barack Obama's website has wiped all criticisms of the surge.

The rest of the article gives an account of archaeologists producing results of how much has been looted and destroyed before going to see for themselves (is that how archaeology is done these days?) and how surprised they were to find that those preliminary calculations were wrong.

According to the Art Newspaper article, "The international team ... had been expecting to find considerable evidence of looting after 2003 but to their astonishment and relief there was none. Not a single recent dig hole was found at the eight sites, and the only evidence of illegal digging came from holes which were partially covered with silt and vegetation, which means they [were] several years old." Furthermore, the most recent damage "probably dated back to 2003," to just before and after the invasion when the Iraqi army maneuvered for the allied attack. (According to other experts, looting probably took place when the Iraqi army first moved out of areas near sites to counter the invasion.)

Neither the British Museum pair nor Prof. Stone responded to my calls seeking comment. The British Museum press official for the Middle Eastern department cautioned that the official report had not yet been compiled, but it seemed that the article was generally accurate. Certainly none of the experts have denied any of it. In the article, Dr. Curtis "admits that he was 'very surprised' at the lack of recent looting, but stresses that ... 'it may not be typical of the country as a whole, and the situation could be worse further north.'"

No doubt. But how could previous assessments have been so wrong, and why would one expect anything to be worse elsewhere? In phone conversations with me, both Donny George and Lawrence Rothfield argued that the eight sites were all known to be well-protected. Dr. George was able to itemize each one: "Ur was an Iraqi airbase and then a U.S. airbase. Uruk Warka was protected by guards from nearby tribes -- we always knew that. Ouelli is largely prehistoric and of no use to looters..." And so on. But Dr. George, perhaps the world's leading authority on the subject, also conceded that the greatest damage done by looters had generally occurred in the 1990s, in Saddam's time. Prof. Rothfield said that the no-fly zones back then had allowed illicit digging to occur.

As an erswhile amateur archaeologist (well, a gopher on archaeological sites, if we are going to be honest) and a great admirer of heroic archaeologists, I was saddened to see that their successors have joined the NGO-tranzi brigade of using inaccurate data to oppose Western actions. But then, what can you expect from an organization called the World Archaeological Committee (WAC)?
Posted by Helen at 12:24