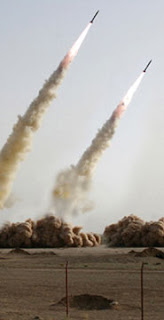 Despite the widespread publicity given to the Iranian photoshopping extravaganza, The Times still has up on its website, a cropped version of the offending photograph, showing the non-existent missile.

This is to support a story written yesterday by Chris Smyth telling us that, "Iran test-fired more long-range missiles this morning, shrugging off international concern over yesterday's launches as the US sharpened its rhetoric against Tehran." Weapons with "special capabilities", we are told, were launched from navy ships in the Gulf ... along with torpedoes and surface-to-surface missiles.

With its transparent attempts to doctor the evidence now exposed, however, the Iranian activities of the last few days are being rapidly re-interpreted. The Los Angeles Times, for instance, is topping its latest report with the headline: "Iran missile tests seen more as theater". Its narrative now runs:

But some arms control experts said the missile barrages may have been just for show and not intended to reveal any new strategic capacity. Iran's conventional arsenal is little match for the sophisticated US and Israeli precision weapons, antimissile batteries and air power, analysts said, and Tehran apparently unveiled no new weapons during the testing.

"This event is the latest scene in regional theatrics and represents Iranian chest-thumping," Graham Allison, director of the Belfer Center for Science and International Affairs at Harvard's Kennedy School of Government, said in an e-mail message. "There is no evidence of a significant advance in previously known missile capabilities of Iran's medium- and long-range missiles."

This is not really coming over in the UK press, which tends to treat Iran as if it was still a functioning state, instead of what is it, a corrupt, backward and wholly dysfunctional kleptocracy on the brink of economic meltdown. 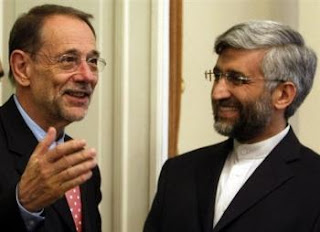 The same goes for the EU "colleagues", who are taking Iran far more seriously than its parlous state merits. Instead of treating the posturing mullahs with the contempt they deserve, we have little Javier Solana planning to hold further discussions with the Iranians on 19 July in Geneva. Hope clearly springs eternal, confounding years of evidence that sucking up to the mullahs is a complete waste of time and effort.

Instead of this misjudged response, which is entirely typical of the EU's dealings with Iran, the only really logical answer to the absurd posturing of this bankrupt regime is to respond in kind. We should send Ahmadinejad a photoshopped picture of his Natanz nuclear facility, after the Israelis have delivered their calling cards.

Contempt, not conciliation, should be the order of the day.