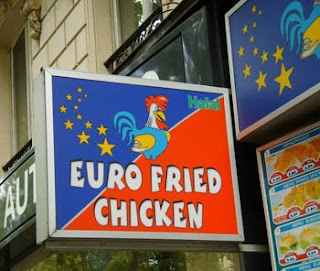 "New Lisbon vote would be suicide for Cowen" headlines The Observer today, with the strap: "Public would punish party, says poll".

The poll had been commissioned by Open Europe and it suggests that Brian Cowen and his Fianna Fáil-led government would suffer a "Gordon Brown-style electoral meltdown" if they held a second referendum. More than half of those asked said they would be less likely to vote for Cowen and his party in an Irish general election if he decided to re-run the referendum

Some 71 percent of voters were opposed to holding a second vote while 62 percent would vote "no” compared to a "yes" vote of 24 percent compared with 47 percent in the June referendum.

If the weight of sentiment for a "no" vote continues, the "colleagues" might feel distinctly uneasy about running a second referendum, which would leave Sarkozy’s EU presidency high and dry. Although, the EU has made more comebacks than Frank Sinatra, options seem to be narrowing and the "Euro-chickens" may be running scared.

It really is going to be interesting to see how they break the impasse.