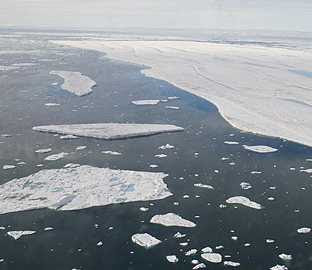 Something we should have picked up yesterday, and now covered fully by Watts up with that, is the story run by The Telegraph (and many others), headed, "Arctic ice shelf splits in big melt".

A part of the Arctic ice shelf has sheared off creating two huge ice islands, we are told, covering an area of seven square miles (our emphasis). This, journalist Paul Eccleston breathlessly announced, "marked the biggest break up of the ice for three years."

Needless to say, it is not very long before we come to the punch-line, "The scientists say they believe the split was almost certainly caused by the warming climate which is affecting polar regions more than anywhere else. The break-up of ice, known as calving, is regarded by scientists as being symptomatic of the warming of polar areas."

Er, right! This is why arctic sea ice is reported to be around a million square kilometres greater in extent than it was this time last year (see pic below) – nearly 400,000 square miles … and they're writing stories about seven square miles? 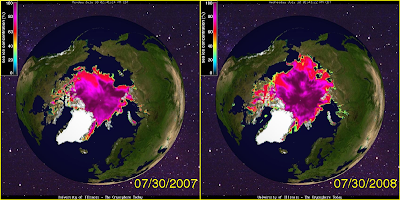 However, there is no need to panic! Warmists will be comforted to learn that this does not in any way impact on the AGW theory.

According to Mark Serreze, a senior research fellow at the US National Snow and Ice Data Center (NSIDC), there is a 90 percent match between rising greenhouse gas emissions, mainly from use of fossil fuels, in recent decades and observations of a retreat of the ice. "Ninety percent ... of the decreasing sea-ice extent is empirically 'accounted for' by the increasing carbon dioxide in the atmosphere," Serreze says.

He adds that, if the match continues to hold true, the annual average ice extent would be several million km smaller by 2050 than predicted by the UN Climate Panel. He thus stands by a prediction that the Arctic Ocean could be ice-free in summer by 2030, decades before predictions by the Panel.

The NSIDC, by the way, suggested in May that it was "quite possible" that the Pole could be ice-free this year.