Meetings in the east 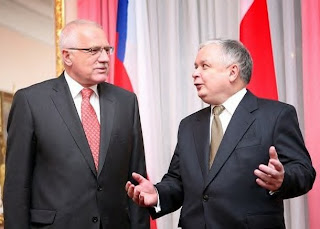 EUBusiness reports the AFP story that there is a meeting due between the two presidents, Kaczynski and Klaus, in Prague tomorrow (Thursday). The main, indeed the only item on the agenda is the Constitutional Reform Lisbon Treaty.

But a senior Polish official dismissed reports that Kaczynski was there to try to influence Klaus's position on the treaty.

"The debate on the ratification of the Treaty of Lisbon is following its own course in the Czech Republic," Mariusz Handzlik, Director of Poland's Office of Foreign Affairs, told AFP in Warsaw.

"President Klaus' position is well known. But the problem remains to be solved in Ireland, not in the Czech Republic or in Poland," he added.

So, if President Kaczynski, the remaining twin, is not trying to influence President Klaus, what is there to discuss?

As it happens, the Czech President's powers are limited in this respect. The Prime Minister, Mirek Topolanek, has already made it clear that he was in favour of the treaty going through, assuming that the Constitutional Court decides on that side. If it so does, there will be nothing President Klaus will be able to do as it will be to the two Houses of Parliament to vote it through (as well as the decision on the radar system).

President Kaczynski, having announced with great pomp and circumstance that the Treaty was dead (a bit like Marlow and the doornail) changed his mind after a conversation with President Nicolas Sarkozy, who clearly has necromancic powers. Certainly, the Constitutional Reform Lisbon Treaty was once again alive in Poland.

The Czech Republic takes over the Presidency in January 2009 and, clearly, does not want to be in the embarrassing position of being one of the few countries holding up the ratification. Not that it is likely to have gone through by then. Will it happen before the next Toy Parliament elections?
Posted by Helen at 12:37