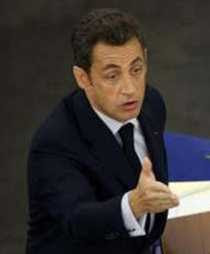 He's said nothing new, but M. le president Sarkozy has spelled it out again, this time to MEPs in Strasbourg: there will be no further EU enlargement until the constitutional Lisbon treaty is in the bag.

Sarkozy also said the EU should not press Ireland to have a second referendum, while stressing that there should be no renegotiation on the "hard-forged treaty".

This just re-states the game plan, putting Cowen in the "hot seat", to let him "spontaneously" decide that the Irish actually want a second referendum – which will then carried out in the Spring, in time for the "colleagues" then to celebrate full ratification of the treaty before the euro-elections.

That, at least, is the plan – and so far they are sticking to it.