An exercise in nation-building 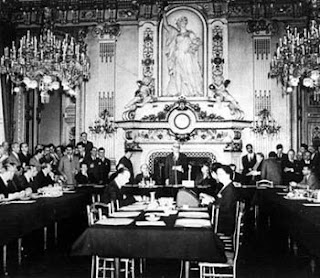 This blog has no wish to get drawn into the tortuous politics of Ulster. It was, after all, in Belfast many moons ago when I went to Stormont to get a briefing on the situation that I first heard that classic joke about Irish politics: "If you think you understand what's going on, you haven't been listening".

But what is interesting about the current Conservative party initiative, attempting to re-integrate the UUP and the Conservatives into one party in Westminister, is that it draws – perhaps unwittingly - from the same well of thinking that drives a corner of European political integration.

This saw its first manifestation in 1951 during the first meeting of the then Assembly of the European Coal and Steel Community, following on from the Schuman declaration (pictured). As the "deputies" found their places in their temporary accommodation in Strasbourg, they chose to sit in groups according to their political leanings, rather than as national delegations, so starting a process which was intended eventually to create European political parties.

That process is still ongoing today, the current EU parliament dominated by political groups, the three big players being the EPP (Christian Democrats), the PES (Socialists) and ALDE (Liberals).

This is far from accidental and was, from the very start, recognised as an important part of the drive for political integration. The aim was to get politicians detached from purely local concerns, thinking and acting on a "European" level, focused on issues rather than local interests. By this means is it hoped eventually that there would be created a European demos, with its own distinctive agenda, separate from national concerns.

This, then is what is being attempted on a different scale in Ulster and, while the process is fraught, with untold sensitivities and traps, it is at least intellectually coherent, resting as it does on the idea that united people require united political parties.

Thus do David Cameron and the leader of the UUP, Sir Reg Empey, in The Daily Telegraph (without direct acknowledgement to Owen Paterson, who has done much of the spadework) call for the "support of all those who share our joint agenda and common vision, regardless of their religion, background, or whatever part of the UK they happen to reside in." This, it is felt, will help people to break away from the "vicious sectarian divisions of recent years."

Should this initiative succeed – and it is touch and go whether it will – the model has applications elsewhere. In Afghanistan, for instance, there are over 70 political parties approved by the ministry of justice, while in Iraq there are nearly thirty, mostly organised on sectarian lines rather than issue-based. It could be considered an advance in political maturity if these countries could follow the initiative being so carefully negotiated in Northern Ireland.

But, if the development of issue-based politics is an essential part of nation-building (or, in the case of Northern Ireland, rebuilding), Cameron, in embracing the Ulster initiative for these very reasons, should be aware of the perils in his own back yard. If the process has value to the Conservative party – and the nation – it has the same value to the European integrationalists, who have so far trapped the Conservative party in the warm, transnational embrace of the EPP.

What it being attempted by the Conservatives in Belfast is also being played out in Strasbourg, for very much the same reasons. That makes it all the more important that Cameron, in recognising the technique, should understand the broader lessons and honour his promise to pull his MEPs out of the European exercise in nation-building.