A haven for libel tourism 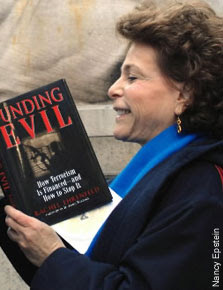 That, ladies and gentlemen, is what this country has become and with that the enemy to free speech. American legislators are fighting back. In the wake of New York State's Libel Terrorism Protection Act, signed into law by Governor David Paterson and known popularly as "Rachel's Law" after Rachel Ehrenfeld, whose book and the libel action against it brought about the legislation, there is now a move to pass a similar piece of legislation through Congress.

In this article Senators Joe Lieberman (Ind. Dem.) and Arlen Specter (Rep.) explain why they think American authors need to be protected from this scourge and why they are sponsoring this legislation.

That free marketplace faces a threat. Individuals with alleged connections to terrorist activity are filing libel suits and winning judgments in foreign courts against American researchers who publish on these matters. These suits intimidate and even silence writers and publishers.

Under American law, a libel plaintiff must prove that defamatory material is false. In England, the burden is reversed. Disputed statements are presumed to be false unless proven otherwise. And the loser in the case must pay the winner's legal fees.

To counter this lawsuit trend, we have introduced the Free Speech Protection Act of 2008, a Senate companion to a House bill introduced by U.S. Rep. Pete King (R., N.Y.) and co-sponsored by Rep. Anthony Weiner (D., N.Y.). This legislation builds on New York State's "Libel Terrorism Protection Act," signed into law by Gov. David Paterson on May 1.

Our bill bars U.S. courts from enforcing libel judgments issued in foreign courts against U.S. residents, if the speech would not be libelous under American law. The bill also permits American authors and publishers to countersue if the material is protected by the First Amendment. If a jury finds that the foreign suit is part of a scheme to suppress free speech rights, it may award treble damages.

Tomorrow Policy Exchange is holding a discussion on the subject of libel tourism. I shall be reporting on it afterwards. In the meantime, let me declare my own interest in the matter. Not only am I anxious that Britain should once again become as much a haven of free speech as the United States is but I do have a personal interest. Rachel Ehrenfeld is a very good friend and I should like to see her in London again. Of course, I could always go to New York.
Posted by Helen at 22:03