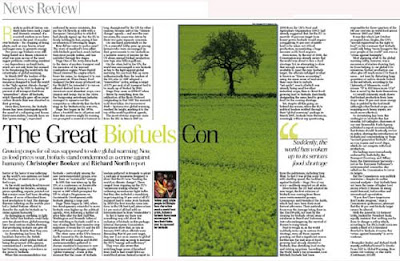 One of our most bizarre findings is from a Cornell University study shows that biofuel production from farm crops such as corn takes 29 percent more energy than is yielded by the fuel itself - and that does not include the distribution energy to transport the ethanol.

To produce a "fuel" which actually consumes more energy than it delivers can only be described as insane – a "crime against humanity". The use of such inefficient feedstocks is made possible only by subsidies ($3 billion a year in the United States, just to support ethanol production) and the power of vested interest. These have basically hijacked the alternative fuel policy.

The equation looks even more insane when it is realised that an average US automobile travels about 20,000 miles per year and uses about 1,000 gallons of petrol per year.

To replace only a third of this petrol with ethanol, 0.6 ha of corn must be grown. Currently, 0.5 ha of cropland is required to feed each American. Therefore, even using highly optimistic data, to feed one automobile with ethanol, substituting only one third of the gasoline used per year, Americans would require more cropland than they need to feed themselves.

There is not and never has been any justification – economic, moral or environmental – for turning high-input food crops like maize and wheat into fuel. It is actually, beyond insanity. Which is why, presumably, the EU is so keen on the policy.