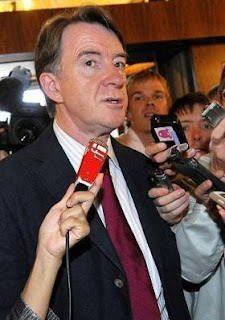 We never, ever thought we would find ourselves in agreement with an EU commissioner, much less Peter Mandelson. But his view on the failure of the Doha round talks, expressed in an opinion piece in The Daily Telegraph today, is unarguable:

The technical nature of the negotiations has all too often hidden the fact that they are about real lives and real lost chances in the developed and developing worlds. The fall-out from this collapse will not be clear for some time. But we can be sure of one thing: we would all have been winners from a Doha deal. Without one, we all lose.

This is so similar to our own view that we could be forgiven for wondering whether the commissioner reads our blog.

What is also remarkable, though, is that the comment comes from the EU trade commissioner and not from a British politician. On the failure of the talks, it seems, our own political "leaders" have no comment, hence our own somewhat jaundiced view which we expressed earlier:

Interestingly, in the United States - a land where some grown-up politics does still exist – we see the Wall Street Journal actually offer political comment, declaring:

The U.S. political class also bears a substantial part of the blame. In its waning months, the Bush Administration has less power to persuade. But part of that weakness goes back to the original trade sins of its first two years. With its steel tariffs and overstuffed farm subsidy bill of 2002, the Administration sent a signal that domestic politics took precedence over U.S. global trade leadership. Its credibility never recovered.

Democrats in Congress have also spooked the world with their blatant protectionism - from their recent veto override of a farm bill jammed with trade-distorting subsidies, to their refusal to ratify bilateral trade deals even with such vital U.S. allies as Colombia and South Korea. Barack Obama's promise to repudiate Nafta if Mexico and Canada won't go along with his ideas was also a trade shock heard 'round the world. For all their talk about listening to America's partners, Democrats are the world's biggest trade bullies.

Nothing of that could apply here as neither main party has an opinion on the subject – other than to fall into line with what the EU has agreed, and then to ignore the outcome because it is entirely out of their hands.

Similarly, do we see comment on yesterday’s publication of the UK Drug Policy Commission's report, but couched in entirely apolitical terms with, of course, no linkage with the failure of the WTO talks – and definitely no political input.

We also see the news of the massive increase in gas prices, but this again is treated at a superficial level without any political dimension. Instead, we see this razor-sharp analysis. Yet, as we remarked recently, this has major political implications, stemming as it does from political failures - which actually span several administrations.

Three major issues, therefore, are all on today's agenda, trade, drugs and energy, but the domestic politicians and the prattling political commentators are silent on them, focusing yet again on the soap opera.

I spoke at length about this earlier with a journalist friend – and exchanged notes with another who was bemoaning the fact that an important and interesting story he had filed had been ignored by the news desk. The conclusion to be drawn is that the political classes are retreating into a second childhood.

Unable to cope with the complexities of the modern world, and their own impotence – having handed on their powers to the EU and other tranzie bodies, and to the quangos at the other level – they devote their time to inane prattle, to fill the void of their own making.

In that very real sense, we are seeing the death of (domestic) politics – not so much fiddling as prattling while Rome burns.