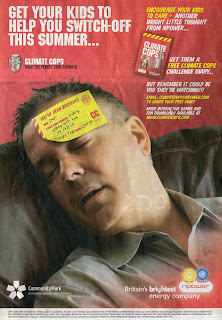 Following our post yesterday on "Climate Nazis", reproduced on Watts up with that, a number of commentators – across both sites – have suggested we contact the Advertising Standards Authority.

We did contact the ASA this morning and, as one might expect, making a complaint is not so simple. The basis of our complaint lies not so much in the advertisement (illustrated - click to enlarge) as in the campaign itself, which is essentially website based.

The remit of the ASA, however, is limited to advertisements in the media and it cannot directly concern itself with the content of websites. Should we wish to complain about the npower website, we were advised to contact Trading Standards – which is unlikely to yield dividends.

However, there is possibly a way forward. The advertisement itself does not refer to "climate crimes" or in any way state explicitly that the purpose of the campaign is to recruit children to spy on friends, family and relatives, to accuse them of "climate crimes" and to keep records of their "infractions".

In that sense, the advertisement is possibly misleading, to which effect we have written a draft letter, published below, which might allow a formal complaint to proceed.

With a view to making a formal complaint about a newspaper advertisement, I wish to seek your advice on its framing in order that it comes within your remit.

The relevant advertisement was in The Sunday Times dated 27 July 2008, placed by or on behalf of npower (attached). In my edition, it was on page twelve.

The substance of my complaint, at first sight, is that it is misleading, in that it addresses parents, inviting them to direct their children to apply by e-mail for a "free climate cops challenge diary", with an additional "offer" of "interactive games and fun downloads", available from a company owned (or managed) website (www.climatecops.com).

However, the tenor of the website is very different from the print advertisement. There, a direct appeal is made to children, inviting them to enlist as "climate cops", with a view to searching out "climate crimes". The website urges its recruits to spy on families, friends and relatives, inviting each of them to build up a "climate crime case file" in order to help them ensure their putative criminals do not "commit those crimes again (or else)!"

I understand that, on their own, websites to not come within your remit and, while I find the tenor of the "offer" made on the website disturbing, it would thus appear that you would not be able to act in respect of that "offer".

This notwithstanding, it would appear that the advertisement is misleading in that it is couched in terms of its address to parents who are invited to "get your kids to help you switch-off this summer". In no way does this advertisement indicate that the company is in fact seeking to indoctrinate children, encouraging them falsely to attribute lack of "energy saving" as "crimes", and encouraging them to spy on families, friends and relatives, inviting each of them to keep records of these "crimes" for future use.

It would be my contention that, were parents fully aware that the intent of the website was to brand them, through the eyes of their children, as perpetrators of "climate crimes", many would feel deeply uneasy – if not very angry - and would not allow or encourage their children to visit the website.

I am inviting (constructive) comments before sending it – which I will do, with or without amendments – tomorrow.

This aside, it would appear that, if npower wishes to recruit children as "climate cops" to root out "climate crimes", there is very little that can be done to stop them via any statutory authority … unless you know different.