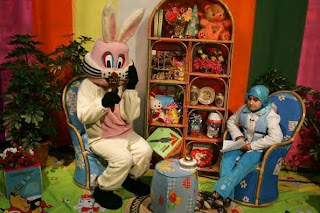 Yes it is boring and tiresome to keep repeating the same things over and over again, be they about the European Union, the UN, assorted tranzis and NGOs or the evil that aid does in developing countries. We are not alone in doing this and there are people whose dedication to this duty fills me with the most astonished admiration.

One such organization is the Palestinian Media Watch that keeps on dripping water on rock of political stupidity and self-righteous victimology (though I would like them to keep their website a little more up-to-date).

Their director, Itamar Marcus, visited Norway recently and managed to spark something of an important political debate there about the money that goes to the Palestinian Authority and what use it is put to.

It seems that the shocked Norwegian politicians and media pundits (a.k.a. news readers) had known nothing about the psychotic mouse, named Farfur, his cousin and successor as presenter of children's programmes, Nahul the Killer Bee or the homicidal rabbit named Assud who thinks he is a lion with a diet exclusively of Jews. Even if they had heard of all these horrors the Norwegians appear not to have worked out that possibly the money they so generously hand over to the Palestinian Authority pays for some of this.

At least now they are debating the subject and, at least, one political party is calling for the cessation of payments though, I have no doubt, that if ever that became serious government policy the weeping and wailing about humanitarian crises would go up.

Still, it is good to know that the media and politicians of at least one donor country are beginning to wake up. Of course, we wrote about this problem extensively in February when the Taxpayers' Alliance produced a report on the subject, and referred our readers back to previous postings. We wrote about NGO funding that goes on hate-filled books and children's programmes in May. I have no doubt we shall return to the subject again. Who knows: maybe Norway will, by then, have shown the way to do things and cut off aid to the pernicious Palestinian Authority.
Posted by Helen at 16:51