We should be happy about Obama's performance but ... 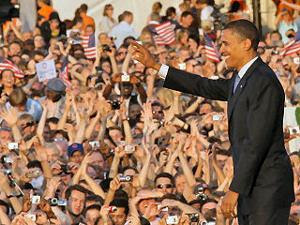 Setting aside the hysteria and stupidity of some of the comments, we ought to be happy about Obama's better than mediocre performance in Berlin last night. However, questions arise. Why Berlin? Germany is not the USA's closest ally and not on the front-line of any fight that the West might be waging.

The frontline in Baghdad and there Senator Obama spoke less than fighting words, as the Wall Street Journal points out, and that is not particularly reassuring. The other developing frontline against the closest of the anti-Western authoritarian states is Eastern Europe, where the countries are, by and large, America's friends and allies. Senator Obama should have gone to Poland where they could have shown him the site of Auschwitz and he could have made his speech there, including the tale of his uncle liberating the camp.

Furthermore, when it comes to the crunch all those hysterical groupies are unlikely to be pro-American even if Senator Obama becomes President Obama. And there is the problem of the European Union and the evolving common foreign policy, which cuts across any ideas of a Western alliance. Given the poor knowledge Senator Obama and his campaign have displayed of foreign lands, it is unlikely that they have heard of this particular problem. They'll learn.
Posted by Helen at 11:30