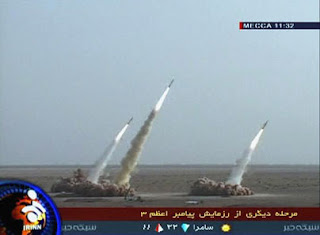 The mystery of those Iranian missiles gets more entertaining by the hour.

Not only did the Telegraph print the doctored picture, obtained by Agence France-Presse from the website of Sepah News, it also graced the front page of The Los Angeles Times, The Chicago Tribune and several other newspapers including the National Post. According to the National Post, it also appeared on BBC News, MSNBC, Yahoo! News, NYTimes.com and many other major news websites.

The Telegraph has now published the "original" in the form of a video grab (left) from Iranian television, which shows the actual launch of three missiles.

This compares with its earlier photograph in the print version (below right). What comes over very clearly is that the Iranians have added another missile to their montage, a creative addition which adds drama to the picture. 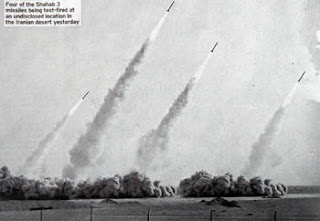 Bizarrely, the Sepah News website owned by Iran's Revolutionary Guards has now made available as of today the original version of the same photograph (below left), this with the three missiles in flight, but with a fourth launcher visible, mounting an unfired missile. This, it would appear, had been edited out of the doctored photograph.

To add to the fun, The Telegraph now retails that the Iranian state television has today reported missiles launched from ships in the Gulf, along with torpedoes and surface-to-surface missiles. It also showed a brief clip of two missiles being fired in darkness – very convenient as this will complicate any comparative analysis.

Gone from the Telegraph's report is the caution in the earlier piece, "reported" details now assuming the veneer of fact, the paper now stating that the latest test follows "Wednesday's launch of nine missiles including a Shahab 3 long-range missile capable of hitting Israel." 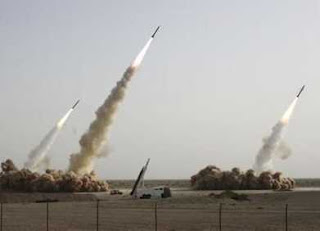 In respect of at least one missile, however, the performance is not so much "exaggerated" as non-existent. How easy do the media fall for these tricks though, making their reports and photographs highly suspect. You would think they would learn.

UPDATE: Many newspapers are now falling over themselves to admit they have been "had", with a good animated version here. 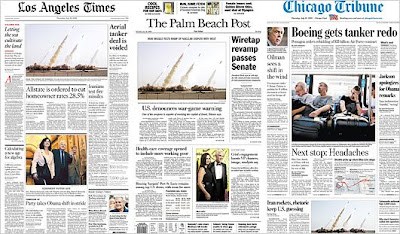 Significantly, The Telegraph is running a story on how the Iranians doctored the photo to hide a "dud", but does not mention that it had published the doctored picture, without noticing the crude photoshopping.