Proud of the Union 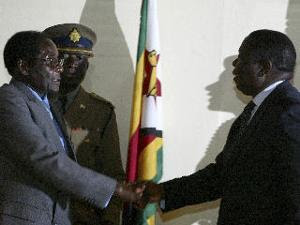 It is times like these which make you really proud to be a European citizen, a member of that glorious, expanding European Union, which can reach out with its "soft power" and bring peace and harmony to the rest of the world.

Thus with such glowing feelings do we applaud our brave and far-sighted foreign ministers who gathered in Brussels today to slay the evil Mugabe, going far beyond the remit that even our own wise and experienced Mr Miliband asked for.

Following in the footsteps of our great leader, it was he, at great personal risk, decided to propose the "killer blow" of adding the names of a further 36 Zimbabwean officials to the EU sanctions list, in a manner which could not help but strike mortal terror into the breast of the foul dictator in Harare.

But so impressed with the prescience of Mr Miliband have been our other 26 gifted foreign ministers that they have not only taken on board this brilliant plan, but have gone even further. Not for them a mere 36 names added to the list. They have made it 37 and gone the extra mile kilometre, adding the names of two companies linked to the Harare government.

Clearly, it was the prospect of this terror that brought Mugabe to heel and forced him into talks with Morgan Tsvangirai, agreeing to sign up to power-sharing talks in a bid to pave a path towards lasting peace in Zimbabwe.

Deny the European brilliance though Mugabe may, it is very clear to all of us who so dearly love the European Union that, having brought peace to Europe for over sixty years, our magnificent leaders have now taken the decisive step in bringing peace and tranquillity to the troubled continent of Africa.

You must excuse me now while I rush off to collect my cheque sing "Ode to Joy".