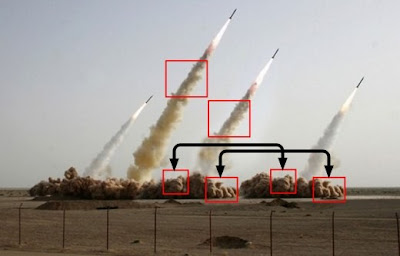 With commendable speed, Little Green Footballs is on the case, pointing out that at least one of the missile photographs released by the Iranians has been photoshopped – with liberal use of the "clone" tool.

Funny enough, that is precisely the photograph that The Daily Telegraph - one of the many newspapers which walked into Qanagate, eyes wide shut - has used in its print edition, to illustrate its story. However, the text by Caroline Wheeler is very guarded: "Nine missiles were reported fired …" and, "The launch included a reportedly improved Shahab-3 missile …".