A blank cheque for the race relations industry 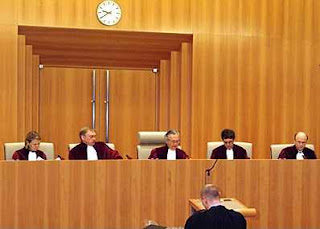 Picked up by the ever-vigilant Wall Street Journal blog (and also AP) is a "groundbreaking" ruling by the ECJ on racial discrimination, made illegal under Directive 2000/43/EC.

The case goes back to 2006 when a director of a garage-door company, Pascal Feryn, was quoted by the Belgian newspaper De Standaard, saying: "we aren't looking for Moroccans. Our customers don’t want them." He elaborated on this in a TV broadcast, declaring, "People often say: 'no immigrants'… I must comply with my customers' requirements." He added: "I'm not a racist. Belgians break into people's houses just as much. But people are obviously scared."

At that, the Centrum voor gelijkheid van kansen en voor racismebestrijding stepped in. This is the Belgian body designated to "promote equal treatment" in accordance with the Directive and it applied to the Belgian labour courts for a finding that Feryn had applied a discriminatory recruitment policy.

The labour court, however, dismissed the application on the grounds that "there was no proof nor was there a presumption that a person had applied for a job and had not been employed as a result of his ethnic origin". No one had complained of discrimination, there was no "victim" and, therefore, no offence.

This was not good enough for the Centrum. It took the case to the ECJ which, yesterday, ruled against the Belgian Court. It decided that an employer who "publicly lets it be known that, under its recruitment policy, it will not recruit any employees of a certain ethnic or racial origin may constitute facts of such a nature as to give rise to a presumption of a discriminatory recruitment policy."

What makes this so very different – even alarming – is that the court has ruled that the "absence of an identifiable complainant does not mean that there is no direct discrimination". Therefore, even though no one is affected by the "discrimination" it must still be treated as a criminal offence.

From here though, it gets worse. The court was also asked to rule on what sanctions were appropriate for discrimination of this kind, the Directive requiring that member states impose "effective, proportionate and dissuasive sanctions," even where there is no identifiable victim.

On this, the court set a number of options. At one level, a national court could simply find that discrimination had occurred, and order that it cease. This, with an "adequate level of publicity," was judged to be sufficient in some cases. But, as an alternative, the court considered that there could be "an award of damages to the body bringing the proceedings."

This, it would seem, leaves it wide open for the race relations industry to hunt out errant employers and drag them into the courts, demanding huge damages for themselves and thus making a tidy profit from their actions – even though they lack a "victim" to champion.

To add insult to injury, the court then made a final ruling. It decided to reverse the burden of proof in this type of case, deciding that if a "discriminatory recruitment policy is alleged by reference to statements made publicly by an employer with regard to its recruitment policy … it is for the employer to prove that it has not infringed the principle of equal treatment."

So, there were are – "European" justice for you: guilty unless you can prove yourself innocent, guilty of an "offence" even though there is no victim, and prey to any passing race relations industry zealot who thinks they can make a quick buck out of taking you to court.

Lord Denning, I think, will be turning in his grave.

UPDATE: We are informed by a correspondent that Feryn does employ qualified Moroccans and other immigrants. They work in the workshop at various production lines.

It complied however with its customers with regard to the nationality of the mechanics and technicians, who are in charge of the on-site assembly of these garage-doors, which nowadays feature coded sophisticated devices in order to attain a certain level of burglar-proofing. The director cited this market constraint as an exception to the general rule of non-discrimination in use at the firm.

The Centrum voor gelijkheid van kansen en racismebestrijding (equal treatment promotion office), funded by the Belgian taxpayer, initially lost the case in Belgium, but since money was not a problem it brought the case before the ECJ with the disastrous ruling mentioned.