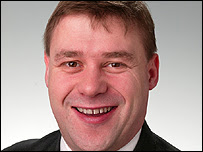 So far down in its running order is the continuing saga of the EU's attempts to replace its failed constitution with a new treaty that presenter Marta Kearney on today's BBC Radio 4 World at One news programme felt it necessary to remind listeners that it was happening at all.

Needless to say, the BBC's way of conveying the issues involved was to get two protagonists to make their pitch, in this case the current Tory Europe spokesman, Mark Francois (top left) pitted against former Europe Minister Denis MacShane (below right).

The Tory pitch, of course, is that if any new treaty involves the transfer of more powers to the EU, then there should be a referendum, although Francois rather pointedly avoided answering the question of what constituted a transfer of powers.

MacShane, on the other hand, dismissed the idea of a referendum, arguing that it would simply be used as a surrogate for the broader question of whether we should remain in the European Union. 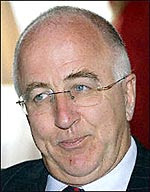 There can be no question that MacShane is right, and many would welcome the opportunity to put the EU issue to the popular vote. But, in pushing for a referendum, one wonders if they have thought it through.

If any new treaty – bearing in mind that it is not yet a done deal – is truly minimalistic, then they end up arguing about a narrow range of what may well be highly technical issues, about which it will be impossible to enthuse the general population, one way of another.

On the other hand, if the intention is really to force a membership referendum in all but name, what thoughts have been given to the chances of winning?

Over all the years that the Eurosceptic community has been fighting the battle, it still has not come up with a credible alternative paradigm for managing our international relations, in the absence of which, there is every reason to suppose that a referendum, if held, would be lost.

Therein, if you like, is the soft sound of wings flapping as chicken come home to roost. In a major public contest such as this, you cannot win an argument on a negative prospectus. Leaving the EU is not enough – there has to be an alternative vision.

In this context, the oft quoted and beguilingly simple alternative of joining a free trade association simply is not good enough. The European Union, as we have so often pointed out, is much, much more than a trading group. Outside the EU, we would have to re-establish any number of institutions and relationships in order to manage our affairs, the nature of which the Eurosceptic community has but little idea. Until it confronts that vital fact, it is going nowhere. 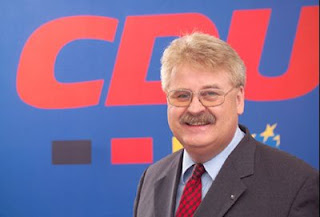 However, all is not lost. The egregious Marta Kearney also interviewed that splendid, almost stage German, MEP Elmar Brok. He rejects any idea of a minimalistic treaty, arguing that 18 member states have already ratified the EU constitution. It really is strange how this man cannot get to grips with the fact that it is only 17, his own beloved country having yet to deposit the papers.

That aside, he avers that, with so many countries in favour of the constitution, their "wishes" for further integration must be taken into account, which means that there is no possibility of accepting a compromise "treaty-lite".

If Brok and his fellow travellers get his way, then the game will be on, and a referendum will be worth fighting. Alas, however, the likelihood is that he will be kept firmly locked in his cupboard, for fear of frightening the horses.

But, as we wearily remarked, there are but two weeks to go before we see the whites of their eyes. And then the picture could have changed completely.