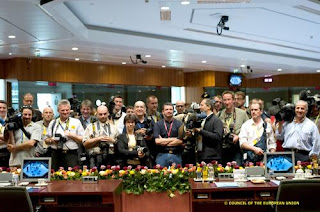 … but it really is theatre. The parade of self-important politicians came riding up to the Justus Lipsus building in their limousines, in front of the ranks of photographers and journalists. Some stopped to talk to the media – Blair did, this time – others didn't. 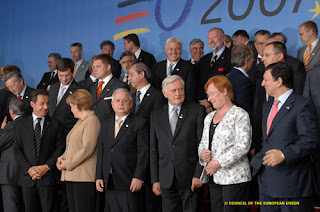 The procedure then is that the "EU leaders" and their foreign ministers all sit round the table – 27 member states – and do what is called the tour de table, each setting out their positions on the headline points. The positions of the main players are all ready well known, and for the "dwarfs", nobody really cares. Since this is all for public consumption, it doesn't mean anything and, by all accounts, it is deadly boring.

Then they have a nice, slap up dinner, when the conversation continues – with the help of simultaneous translation – and they all pack up and go to their hotels or embassies.

The presidency – this time represented by Merkel – gives a press conference, which says very little, because very little has happened. This time, she says: "There was broad agreement that we would make all necessary efforts to reach an agreement. Is that possible? It's not possible to say tonight." 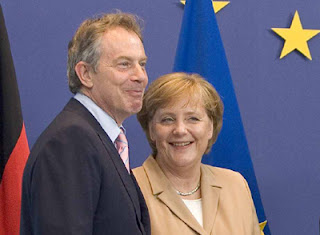 Meanwhile, all the assembled journos, most of them also bored out of their skulls, have to summon up enough enthusiasm to give their reports. Each of them desperately seeks a new or fresh angle on the "bruising battle" and "tense summit" or some such (mind you, Merkel and Blair don't look very tense - and neither did the rest of them, except Kaczynski). And then they're off (the journos, that is) to the bars of Brussels, or wherever.

But this is like the magician's assistant – the curvaceous, scantily-clad blond, whose job it is to distract attention from the magician's sleight of hand. Behind the scenes, there is serious work being done, but it will not be reported and we will only find out about it later – long after the hype has died down.

That is why the EU is so dangerous. Nothing is what it seems but there is one constant – we are about to be stitched up (that's the polite word for it). The question is not whether, but precisely how.