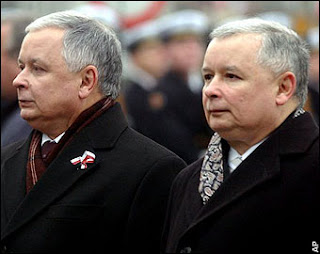 There appears to be no limit to the Poles’ ability to provide us all with entertainment. The Kaczynskis (a well-known comedy duo that goes around masquerading as president and prime minister) have come up with a new gimmick.

This morning’s Times put it succinctly: “Poles raise war dead before EU Summit”. As I reeled at the thought of some sort of a mass séance for the benefit of the gathering leaders and wondered who will be the medium or whether there will be more than one, given the numbers and what is the plural of medium, it became obvious that it is merely the idea of the war dead that the Poles are raising.

The subject at issue is still that pesky voting system. The Polish government (I cannot believe anybody else in Poland is interested in the subject at all) wants as many votes in the Council as Germany has or, perhaps, even more. Who can tell?

To this end the Kaczynskis are insisting on a different method of calculating votes that would involve the population and square roots and who knows what. Unfortunately, one runs into a serious problem immediately.

By population, does one mean population in residence? If so, then the Poles will have problems as a goodly proportion of their population is spread across western Europe in pursuit of the sort of income they cannot get at home as the economy is stagnating while Tweedledum and Tweedledee of East European politics play silly-ass games.

Their latest whiz is to say that Polish population should be calculated on the basis of a projected growth from the pre-1939 numbers as Poland lost rather a large number during the war.

While that is undoubtedly true, one has to point out that Germany also lost rather a large proportion of its population and if one started projecting that from 1938, taking into account the growth at the time, one would still end up with more German than Polish votes in the Council.

What the Poles are trying to raise is not so much the war dead but guilt and victimhood. This is not a particularly good idea when it comes to the Second World War.

The Evening Standard helpfully enumerates all the ways in which Poland suffered in the war and after it:

 After the Second World War Poland emerged around 20 per cent smaller with the borders being shifted westwards.
 The changes to the size of the country led to millions of people seeking new homes abroad.
 Over half a million fighting men and women, and six million civilians (22 per cent of the total population) died during the war.
 Up to 1.5 million people died in Auschwitz, in southern Poland, the largest of the concentration camps.
 The People's Republic of Poland was officially proclaimed in 1952 after a shift towards Stalinism following the war which led to years of totalitarian rule.

Problems arise immediately. Poland was shifted westwards and did lose some territory but it actually meant that it acquired some German land, which the Germans may well consider to be a little unfair. The shift was imposed by the Soviet Union, incidentally. The land Poland lost in the east is now part of Ukraine, another rather thorny issue.

It was not so much the changes in the size of the country but the successive political systems imposed on it by Germany and Soviet Union to start with, then Germany, then Soviet Union again that caused a certain desire on the part of many people to try to get to other countries, not least West Germany.

Then we come to the dead. It is that figure of 6 and a half million that is projected to give the present Polish population an increase of 28 million now. Do we count only those killed by the Germans or those killed in eastern Poland and the Soviet Union as well? Of the half a million fighting men and women quite a few fell victim to the Red Army and the NKVD.

One could argue that it is irrelevant who was responsible – dead is dead. Given that the Kaczynskis are trying to play on German guilt, the perpetrators are of some significance.

Then there is the question of the Polish Jews, possibly the thorniest of all. A fair proportion of those civilians were Jews (though I have no desire to become involved in the arguments as to what proportion exactly as there can be no question that non-Jews suffered badly as well).

There is a fair amount of evidence that the Poles in many places assisted the Gestapo reasonably enthusiastically in the rounding up and murder of the Jewish population. This article, on the other hand, concentrates on what it calls anti-Polish Jewish collaboration with the Red Army in eastern Poland that is the area occupied by the Soviet Union until June 1941.

Nor did the problems stop after the war. Returning Jews found that the Poles were not very welcoming and, indeed, there were quite a few murdered.

It has also been pointed out with a good deal of justification that Jews often took their revenge on the Poles they thought, rightly or wrongly, to have betrayed them to the Nazis.

Before I am taken to task, let me point out that I am very well aware of Poles who risked their lives to help Jews, of the Polish underground trying to get information out about the death camps and of the Home Army helping to save participants of the Warsaw Ghetto Uprising.

I am also aware of the brutality with which both those uprisings were put down, though, again one needs to add that those who had survived the Nazi repression of the Warsaw Uprising of 1944, mostly fell foul of the Soviet authorities and the Polish Communist government after the war.

One can go on analyzing the wartime losses of Poland and other countries in the area for a very long time and come to no conclusion whatsoever. Who would have thought that one day all that horror, all that tragedy, all that sacrifice will be used to argue for more votes in the European Council? It makes one very humble.