Good tunes from the devil 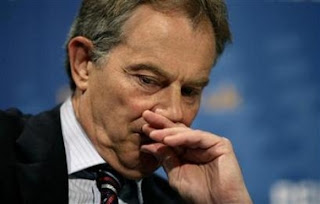 And indeed he was exercising that right, giving a lecture on the nature of public life and the changing relationship between politics and the media in the 21st Century, to an audience of journalists at the Reuters building in London

"This was not a whinge," said Blair. "This speech is not a complaint. It is an argument." The relationship between politics, public life and the media was changing as a result of the changing context of communication in which we all operate. No-one was at fault - it was a fact. But it was the prime minister's view that the effect of this change "is seriously adverse to the way public life is conducted".

Thus, he said, "we need, at the least, a proper and considered debate about how we manage the future, in which it is in all our interests that the public is properly and accurately informed. They are the priority and they are not well served by the current state of affairs."

Doubtless by then, the hacks were dipping their pens in vitriol, ready for the off and Blair saved his prediction to the very last, saying of his speech, "I know it will be rubbished in certain quarters." adding, with a touch of defiance, "But I also know this has needed to be said."

Given the author and the way he had manipulated that media, cries of hypocrisy and worse were not long in coming. But there were nevertheless points he made that stand up, despite the source.

We can agree, for instance, that a free media is vital to a free society and have been among the many blogs to observe that we are not well served by our media. It is "hard for the public to know the facts, even when subject to the most minute scrutiny," says Blair, and we would agree with that. It would also be difficult to avoid agreement with his view that the media is qualitatively and quantitively different today.

We need not detain you with all of Blair's view's on this. His main thesis is the changing context in which 21st Century communications operates, where the media are facing a hugely more intense form of competition than anything they have ever experienced before. They are not the masters of this change, he says, but its victims:

The result is a media that increasingly and to a dangerous degree is driven by "impact". Impact is what matters. It is all that can distinguish, can rise above the clamour, can get noticed. Impact gives competitive edge. Of course the accuracy of a story counts. But it is secondary to impact. It is this necessary devotion to impact that is unravelling standards, driving them down, making the diversity of the media not the strength it should be but an impulsion towards sensation above all else.

The consequences of this are that scandal or controversy beats ordinary reporting hands down. News is rarely news unless it generates heat as much as or more than light. Then, attacking motive becomes far more potent than attacking judgement. It is not enough for someone to make an error. Third, the fear of missing out means today's media, more than ever before, hunts in a pack. In these modes it is like a feral beast, just tearing people and reputations to bits. But no-one dares miss out.

Fourth, rather than just report news, even if sensational or controversial, the new technique is commentary on the news being as, if not more important than the news itself. So - for example - there will often be as much interpretation of what a politician is saying as there is coverage of them actually saying it. In the interpretation, what matters is not what they mean; but what they could be taken to mean. This leads to the incredibly frustrating pastime of expending a large amount of energy rebutting claims about the significance of things said, that bears little or no relation to what was intended.

In turn, this leads to a fifth point: the confusion of news and commentary. Comment is a perfectly respectable part of journalism. But it is supposed to be separate. Opinion and fact should be clearly divisible. The truth is a large part of the media today not merely elides the two but does so now as a matter of course. In other words, this is not exceptional. It is routine.

The final consequence of all of this, says Blair, it is rare today to find balance in the media. Things, people, issues, stories, are all black and white. Life's usual grey is almost entirely absent. "Some good, some bad"; "some things going right, some going wrong": these are concepts alien to today's reporting. It's a triumph or a disaster. A problem is "a crisis". A setback is a policy "in tatters". A criticism, "a savage attack".

And is it becoming worse? Blair says yes. And a way needs to be found to repair the relationship between public life and media. "The damage saps the country's confidence and self-belief; it undermines its assessment of itself, its institutions; and above all, it reduces our capacity to take the right decisions, in the right spirit for our future."

In all, not a bad speech, but will the media get past the ad hominem bit and look at what Blair said? Given the man, that will be difficult but even they need to acknowledge that the devil sometimes has some good tunes.