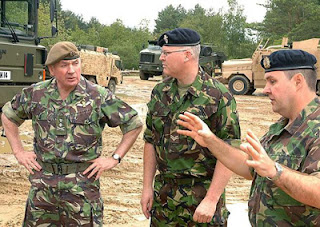 If you did actually want to know what our Army is for, and what it should be doing, never fear. General Sir Richard Dannatt, Chief of the General Staff (pictured, extreme left), revealed all in a speech to the RUSI Future Land Warfare Conference on Tuesday 5 June 2007. Here is a sample:

I am determined that we should maximize our people's potential through a greater understanding of the Manoeuvrist Approach and Mission Command, recognizing also the importance of a Comprehensive Approach within the framework of coherent campaign plans. I would hope that there is nobody in the room who is not completely familiar with the tenets of the Comprehensive Approach, and yet we still struggle to implement a truly unified purpose and methodology to tackle operations. We are operating in an era in which campaigns are likely to require non-kinetic effects more often than kinetic.

Put him down in the plains of Helmand Province to deliver that, and I am sure the Taliban would run a mile. On second thoughts, though, it would probably be banned by the Geneva Convention.