With the greatest respect in the world

Though not in Sir Humphrey’s position I, nevertheless, feel inclined to use that phrase with gritted teeth as I read about the new Prime Minister's daily antics, so reminiscent of Blair's in 1997.

Blair, let us recall, was also hyperactive in those weeks immediately after the election and also spent some time "wrapping himself in the flag" just as Brown keeps talking about Britishness and British values. None of this means anything.

So, let us begin. 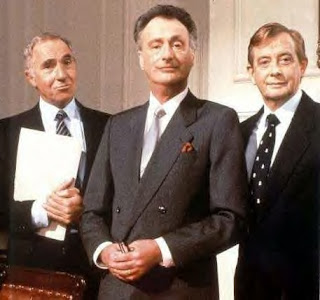 With the greatest respect, Prime Minister, it is a little pointless to keep talking about all the changes that are about to start and new beginnings when all you are doing is taking over half-way through the third term of an existing ministry.

While it made sense for your predecessor, Tony Blair, in 1997 and for Margaret Thatcher in 1979 to speak of great changes, it makes no sense for somebody who was effectively appointed by his party to be the Prime Minister, regardless of how many new appointments he might make in his Cabinet or how many new highly paid new ministerial jobs he might create. It is still the same government with the same mandate.

Nor does it matter how many times the Cabinet has been summoned in the first two days for no very good reason or the fact that meetings will now be moved from Thursday to Tuesday. Very few people know or care when the Cabinet meets.

Nor will anyone, apart from a few journalists in the MSM be terribly impressed by the "new" Cabinet. The Cabinet of All the Talents has boiled down to several ministers who have already displayed their incompetence, such as Jack Straw, Yvette Cooper (who will only attend some Cabinet meetings), Ruth Kelly and others and a large number of inexperienced politicians who are unlikely to stand up to the Prime Minister.

With the greatest respect in the world, Prime Minister, your Cabinet is going to be even more of a one man show than your predecessor's was. There will be nobody like you to stand up to you. Of course, Prime Minister, one cannot altogether rely on friends, such as Alistair Darling, to remain quiescent as Chancellor of the Exchequer but that, presumably, is precisely what you are relying on.

The ministers from outside will not amount to much, even if Shirley Williams (now Baroness Williams) does come into the big tent. To say that she is past her sell-by date as a politician is to make a statement that is about thirty years out of date.

Then there are Lord Malloch Brown, the man who ran interference for SecGen Kofi Annan in the oil-for-food scandal and is now the Vice-President of the Soros Fund, Sir Digby Jones, soon to be Lord Jones one assumes and, possibly the only imaginative appointment, Sir Alan West, former First Sea Lord who becomes junior minister in charge of security matters and Sir Ara Darzi, a surgeon who will take on the rather nebulous task of "improving patient care and building partnerships with staff".

All very jolly, of course, though hardly revolutionary, Prime Minister or even a series of particularly bold decisions. Outside "experts" are always being brought into governments by politicians with variable success. Frankly, Prime Minister, with respect, you would have been better off to use these people as advisers if you wanted them to help you, that is, rather than to silence them.

As it is, they will be in the invidious position of being inside that big tent but at your mercy as none of them will have any standing or support in Parliament, let alone the party.

What of the supposed constitutional revolution that so excited journalists yesterday?

After carrying out the most sweeping Cabinet reshuffle of modern times, the Prime Minister will promise that in future ministers will have to seek parliamentary approval before a major commitment of troops overseas, subject to operational needs and secrecy.

There will be "confirmation hearings" for major public appointments, curbs on political advisers and an independent figure to investigate breaches of the code of conduct for ministers. Mr Brown demonstrated that he wants to set a cracking pace - after months of limbo during Tony Blair's farewell - by summoning the new Cabinet for its second meeting within 24 hours.

With the greatest respect in the world, Prime Minister (and ladies and gentlemen of the media) these are merely administrative adjustments. As it happens your predecessor (remember his name?) did seek and get parliamentary approval before he sent the troops to Iraq. That approval weakened because things did not go quite as smoothly as expected after the first burst of enthusiasm and because some of the arguments he had used to persuade you and your colleagues turned out to be spurious.

That, Prime Minister, is because he did not dare to talk of British interests. Will you when the time comes?

A real constitutional revolution that will revive faith in politicians (well, actually, Prime Minister there never was all that much faith in them and why should there be?) would be the return of legislative powers to Parliament. Now that would be a bold decision. Will you do it, Prime Minister?

Will you, at the very least, not show yourself to be your predecessor’s poodle (though, with respect, real poodles have far more personality than the average politician) by agreeing to turn the mandate he signed in Brussels into a new constitutional treaty without as much as a squeak in protest?

A bold decision to fight for Britain's interests and for a complete change in the European structure, threatening withdrawal from the outdated, undemocratic, authoritarian even by its own standards and economically backward European Union would be a real constitutional change. Of course, you would need the people's approval and that, really, would be a very bold decision. With the greatest respect in the world.