Can't they think of anything sensible? 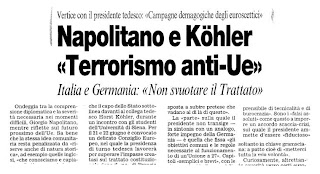 Thanks to Elaib’s posting on the Brussels Journal and an article in the Sunday Express, we are led to a report in Corriera della Sera, which tells us that the German and Italian Presidents have joined forces in attacking all those who criticize the European Union.

Nothing wrong with that, you might say. You would expect them to criticize us and, in any case, is it not part of a political debate? Indeed it is, and speaking quite frankly I would not like to be praised by either the German or Italian President (or, come to think of it, the British Prime Minister). It is the emotive language used by these two personages that makes it all so … well, how shall I put it … hysterically funny.

Apparently, those who criticize the EU and oppose further integration or, indeed, the forthcoming treaty that may or may not introduce the Constitution for Europe (it failed last time), are “psychological terrorists” as well as despicable demagogues for suggesting that the EU is, in intention a superstate.

Actually, I am not sure it will be a superstate in the acceptable meaning of the expression but that the intention is the creation of a state and a highly centralized one at that, is as true as is the present undemocratic nature of its managerial governance. According to those great men, Giorgio Napolitano, a former Communist hardliner as Elaib helpfully points out, and Horst Köhler, this is the equivalent on some level to blowing up trucks besides lines of children who are waiting to be given sweets, kidnapping, torturing and murdering teachers who wish to teach girls and numerous other actions of that kind. Well, in a psychological sort of way, whatever that may mean.

How dare we suggest that the EU is not a democracy? Everyone or, at least, the two presidents know that this is “una forma nuova di democrazia”. (I think that needs no translating.)

This is not a new idea and I do not even mean the discussion produced by Colin Crouch for the Fabians, as discussed by Brussels Journal. The Soviet Union and its colonies were all new and real forms of democracy. That is why they were called people’s democracies, as opposed to the other kind that was run entirely by baboons.

What intrigues me, as ever, is the poverty of their arguments. When in doubt accuse the eurosceptics of heinous crimes. Remember the fragrant Commissar’s ill-fated speech, which, we think, she delivered at Terezín? We followed the story extensively here, here, here, here, here and lots of other places. Just search for Terezín on the blog.

The gist of that story was that the fragrant Margot produced a text of her speech that was supposed to celebrate the sixtieth anniversary of the ending of World War II in which she intimated that all those who opposed the Constitution would be responsible for a new Holocaust, because it was evil nationalism that caused it. We went through all the arguments at the time, mentioning such things as the supranational aspect of Nazism and, much more so, of Communism and the fact that countries that negotiate through national governments do not appear to have started new Holocausts.

Margot was not the only one to use that argument. During the Dutch referendum campaign some Dutch MEPs produced a short film in which they argued that if the Constitution is not passed there will once again be a Holocaust, Srebrenice and events like the Madrid bombings. The outcry across the country made them withdraw the film very swiftly and one can no longer find it on the internet though I did manage to see it at the time.

What is it about these people that makes them incapable of producing reasonable propaganda, never mind arguments?