Gearing up for the fight 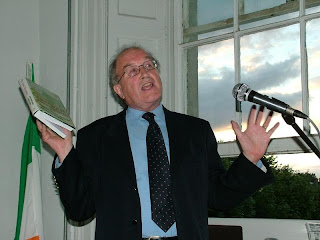 In some countries they are gearing up for the fight. While we still have to achieve that referendum for the ... I mean ... conventional amending treaty, in Ireland they have already been told that there will be a vote on it.

While the Prime Minister, Bertie Ahern, rather gloated about the fact that the substance of the old constitution had been salvaged, his statement has been extremely useful to his opponents.

Anthony Coughlan, Secretary of the Irish National Platform EU Research and Information Centre, has fired off his first salvo. He lists

The four important things the proposed revised EU constitutional treaty would do and why democrats everywhere should oppose it.

1. IT WOULD GIVE THE EU THE CONSTITUTIONAL FORM OF A STATE FOR THE FIRST TIME AND MAKE US ALL REAL AND NOT JUST HONORARY CITIZENS OF THIS EU STATE

2. IT WOULD GIVE THE EU MORE LAW-MAKING POWERS

3. IT WOULD GIVE THE BIG STATES MORE WEIGHT AND SMALL AND MIDDLE STATES LESS WEIGHT IN MAKING EU LAWS

4. IT WOULD REMOVE THE RIGHT TO A PERMANENT EU COMMISSIONER

There are plenty of other reasons but these will do as headings to start with. Read the whole document here.