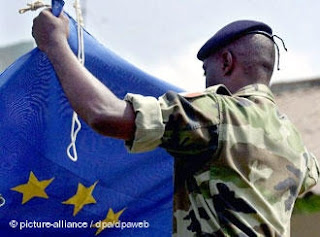 If the devil is not only in the detail, that certainly does not mean that there is no devilry in the detail. In our continuing trawl through the European Council "mandate" we find tucked into page 26, in the eighth numbered paragraph under the anodyne heading: "Amendments to the EU Treaty Annex 1", this little gem:

8) In Article 11, insertion of a paragraph 1 reading as follows (the current text of paragraph 1 being deleted):

1. The Union's competence in matters of common foreign and security policy shall cover all areas of foreign policy and all questions relating to the Union's security, including the progressive framing of a common defence policy that might lead to a common defence.

This is followed by a longer piece of text, which is reviewed below, but this is the crucial piece.

Now, in what might be evidence of hurried drafting, this raises a slight problem as the new paragraph of Article 11 actually replicates (in part) Article 17 of the Treaty, which reads, in full:

1. The common foreign and security policy shall include all questions relating to the security of the Union, including the progressive framing of a common defence policy which might lead to a common defence, should the European Council so decide. It shall in that case recommend to Member States the adoption of such a decision in accordance with their respective constitutional requirements.

Presumably (although this is not stated), this paragraph will be deleted – the two passages can hardly stand in the same treaty.

What needs to be noted is the substantive difference, which is the deletion of this phrasing:

…should the European Council so decide. It shall in that case recommend to Member States the adoption of such a decision in accordance with their respective constitutional requirements.

This is replaced by a longer passage (broken into two paragraphs for ease of reading):

The common foreign and security policy is subject to specific procedures. It shall be defined and implemented by the European Council and the Council acting unanimously, except where the Treaties provide otherwise. The adoption of legislative acts shall be excluded.

The common foreign and security policy shall be put into effect by the High Representative of the Union for Foreign Affairs and Security Policy and by Member States, in accordance with the Treaties. The specific role of the European Parliament and of the Commission in this area is defined by the Treaties.

We are back to the "devil in the detail". In the first passage, in the existing treaties, we see that the decision rests at the discretion of the European Council. But all it can do it make a recommendation to the member states, which can choose to adopt such a decision "in accordance with their respective constitutional requirements." In the UK, this would require, at the very least, the approval of Parliament.

What is happening, therefore, is that the decision process on the "progressive framing of a common defence policy" is being re-framed, taking it away from the member states. Instead, it becomes the province of "the European Council and the Council", cutting out national parliaments and any reference to "respective constitutional requirements".

For sure, the decisions as EU level are still unanimous, but the fact is that, having been national decisions, they now become European Union decisions. Is this a small, technical point? Or does this represent a significant transfer of power from the member states to the European Union?

I suspect those who choose to see merely small textual changes of little significance will continue to do so, but any rational assessment of what is going is suggests that this is another small but significant step towards a Common Defence Policy.

This is the game the EU has been playing ever since Maastricht, when the policy was first introduced. Every treaty since, we have seen small, subtle adjustments in wording, every change tightening the screw slightly, bringing the "colleagues" slightly closer to their goal.

This latest adjustment, this time, comes under the guise of a "Reform Treaty" instead of an "EU Constitution". The name might change, but the objective remains the same.

I have added this post (slightly modified) to our analysis of the mandate on Page 2 of this blog. The comment link (below) takes you to the discussion on the mandate.