But will they make better films? 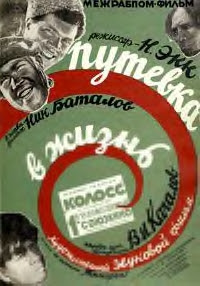 Perhaps it is nostalgia for my mis-spent youth but I have a weakness for Soviet propaganda films. Actually, all Soviet films were propaganda one way or another but some more so than others. "Putyovka v zhizn" (A ticket into life) was one of the better early ones. In fact, it was the first Soviet talkie and dealt with the fate of the bezprizorniki, the homeless children and teenagers, displaced by the civil war and its aftermath. As it happens, even more were displaced by the murderous collecivization campaign but that was not mentioned then or afterwards.

According to this and one or two other films, the youngsters eventually found themselves in youth camps, organized according to the relatively enlightened educational principles of Anton Makarenko.

There was a good deal of living your lives for the community but also emphasis on physical labour, education and individual responsibility in a non-individual sort of way. Sadly, the reality was not even the way Makarenko would have liked it. Most of the youngsters were rounded up and either killed or sent off to tough adult penal colonies.

The propaganda was powerful though and I still think many of the films were quite good. Many, as it happens, were absolutely terrible and into that category I would place the wretched "Battleship Potemkin".

How does this concern us on this blog? The question has arisen again: does state subsidy produce good art or entertainment. Specifically, does it produce better films. By and large, I would say, no, though some exception must be made for the British quota quickies of the thirties. Most of them were terrible but one can find the odd good one.

The EU, as it is to be expected, is a great believer in subsidizing the cinema in order to overcome American cultural hegemony. I have met people who really do talk that way, unbelievable though that may sound.

To this end, Hollywood Reporter tells us:

European filmmakers can continue claiming government grants for their movies for another 2 1/2 years, until 2009, the European Commission has ruled.

The commission -- the European Union's executive authority -- made the decision just two weeks before the regime for state subsidies was due to expire.

EU information society and media commissioner Viviane Reding said the extension will give businesses and governments the legal certainty needed to keep investing in European films, TV series and other audiovisual works. "Today's decision gives all stakeholders the agenda for the definition of the future rules," she said.

OK, so they have that bit about the Commission wrong - it is far more than the European Union's executive authority - but it is a mistake that is easy to make for people who are not particularly interested in the politics of the EU. And it is not nearly as silly as Commissar Reding's comments about legal certainty and stakeholders having the agenda for the definition of the future rules. Imagine how bad would be the films she made.

Films are exempt from the usual rules of the Single Market and no state subsidy. Other sections of the economy can be exempt in practice but films are in theory as well.

Total government aid for EU filmmakers is estimated at €1.2 billion ($1.6 billion) a year,more than half of which is provided by the French government. Filmmakers argue that they need the exemption from the usual EU state aid rules as cinema is a very specific sector and European films have a very low market share.

Of course, it may be that their market share is low because, being subsidized by the state, the filmmakers do not feel they have to make good films or even films that anybody wants to see.

Certainly, subsidy has not made the films any more popular.

Last year, 926 million cinema tickets were sold in the EU, 3.6% more than 2005. European films accounted for 28% of these, compared with 25% the previous year. The EU's MEDIA program of direct European aid to filmmakers provides an additional €755 million ($1 billion) in subsidies over a seven year period.

There seem to be only two solutions and one of them is completely impractical these days. One can either ban the cinemas from showing any but EU subsidized films (that's the impractical one) or one encourages filmmakers to produce films that people want to see. That is not just impractical but completely impossible.

Email ThisBlogThis!Share to TwitterShare to FacebookShare to Pinterest
Labels: films